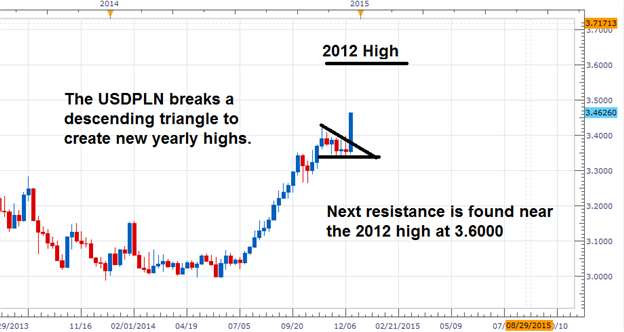 Today, the National Bank of Poland released the minutes corresponding to their December 3rd MPC meeting. For the key topics reviewed-economic growth, inflationary pressures, and interest rates- committee members aligned on both sides of the fence. Economic indicators released prior to, and after the decision lend support to both those in favor of maintaining the interest rate and those justifying a reduction.

In review of economic growth, both external and domestic factors were evaluated. For proponents of the submitted 1.0% reduction, a slowdown in German growth (0.1%) and PMI (49.5) was of concern. Furthermore, it was noted that several major banks including but not limited to the ECB, PBoC, and BoJ currently have expansionary monetary policies in place. In their view weak external demand will likely translate into slow Polish economic growth. Conversely those in favor of maintaining the 2.0% interest rate highlighted the factors pertaining to robust domestic demand and a favorable structure of GDP growth.

Rises in consumer demand and investment spending have arguably offset much of the weak external demand, contributing to the positive balance on the combined capital and current accounts for the month of October. With a net export balance of +0.1 billion EUR, the total account balance was positive at EUR 0.3 billion. Exports valued at 14.7 billion increased at 3.2% while imports valued at only 14.6 billion increased by 3.4%. Responses regarding GDP were polar in nature—a pattern also present during the inflation discussion.

Debate surrounding the CPI was not centered on whether prices were considered too low, but rather on how long they would persist below the targeted 2.5%. Members were in agreement that a CPI of -0.6% was below the forecast, but to what extent they should be concerned remained contested. Those gauging the risks to achieving the mid-term target as low, cited external factors as the reason for deflationary pressures. Their claims are supported by core inflation (net of food and energy) which increased 0.2% in October. Thus, in their view prices are responding to current monetary policy. Those holding the opposing view, fear that revised down inflation expectations might become self-fulfilling.

With rates held at 2.0%, the duration for which moderate real GDP growth coupled with low inflation corroborate the negative output gap remains to be seen. In terms of currencly, the zloty has weakened as the USDPLN breaks a descending triangle, creating new yearly highs.