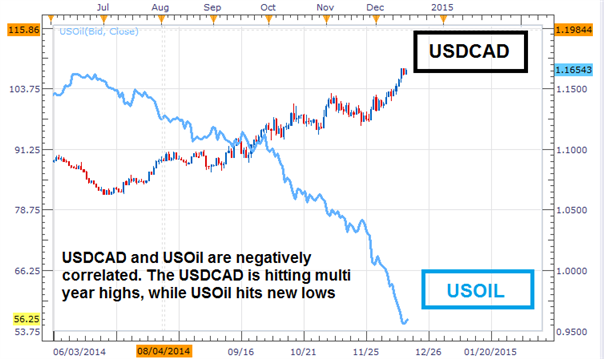 Left Exposed to the Price of Oil, Canadian GDP is Revised Down

Canada is more exposed to oil fluctuations now than during previous decades riddled with supply-side imbalances. While only 10% of GDP is derived from oil in Canada, any drop in the commodity’s price still has a profound effect on production intensive regions as well as the government’s revenue and the overall economic wellbeing of consumers.

With the ratio of crude oil to demand higher at present than during the Asian crisis in 1997-98, the weighted index of Canadian oil has fallen 40% over the last four months. Receiving fewer dollars for any given level of output restricts the amount of goods/services producers and consumers are able to obtain. Furthermore, when taxed under a three-tier system, any reduction in Canadian oil and gas income parlays into a reduction in government revenue. As such if oil ends the year at an average of $70 a barrel or less the government stands to lose at minimum 10-13 billion dollars. This negative income shock, to both private and public enterprises, then transfers to the national account as a whole.

At present the national income has declined by 34 billion dollars and is fast approaching the levels lost during the Asian Crisis (35 bn.) and the 2001 US Recession (46 bn). Bearing these levels in mind the Canadian Imperial Bank of Commerce has reduced the 2015 economic growth outlook from 2.7% to 2.2%. Moreover, with oil to naturally suppress rising inflation, the Bank of Canada is in no rush to raise interest rates.

With the downside risks associated with oil highly visible, the USDCAD is hitting multi-year highs, while USOil hits new lows.