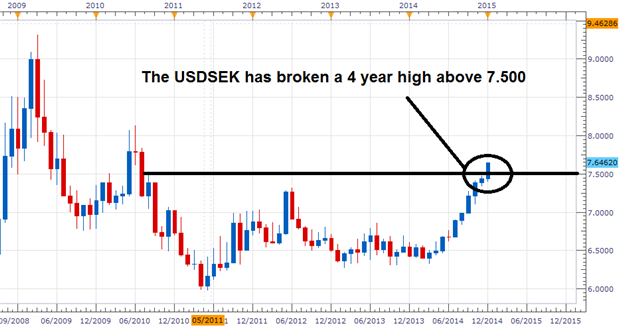 The Executive Board of the Riksbank concluded that an extended zero repo rate would be the appropriate monetary policy for achieving their 2% mid-term inflation target. More expansive, this monetary policy was implemented to prevent long-run inflation expectations from continuing their descent and is to remain in effect until the latter half of 2016. The decision came following an unbalanced assessment of the financial markets, the domestic economy and international economic activity.

Within the financial markets, the price of oil has had the most widespread effect on economic activity. While falling oil prices have provided a positive shock to importing countries, it has hampered growth among exporting nations. The overall effect has resulted in lower inflation globally. In addition to inflation, yields on government bonds have also remained low by historical standards and have even fallen into negative territory; two year bonds issued in Sweden and Germany have a 52 week lower bound of -0.054% and -0.092% respectively. This underwhelming return is in part a reflection of the markets expectation that central banks will continue to hold rates at or near zero for an extended period of time based on the international and domestic environment.

While signs of economic recovery are present in the international marketplace, many countries are cautiously approaching monetary tightening. While the U.S. remains on track to raise rates in 2015 due to a strong November unemployment figure (5.8%) and steady inflation (1.7%), the U.K. has pushed back their first rate hike until the end of 2015. Furthermore, while China and Norway unexpectedly cut their interest rates in November and December respectively, the ECB and Japan have each extended their asset purchase programs to provide further economic stimulus. The domestic situation remains just as varied.

Sweden’s economy has improved by way of growing GDP (+1.3%) and falling unemployment (-0.1%), yet still remains prone to low inflation (-0.2%). With foreseeable oil prices to remain suppressed, the repo rate will remain at zero until the CPIF inflation is near 2.0%. According to the Riksbank, should this movement take an extended period of time the first phase of continued monetary easing would be to push the timing of the first rate increase back even further. The Executive Board would likely present such measures at their next meeting on the 11h of February.