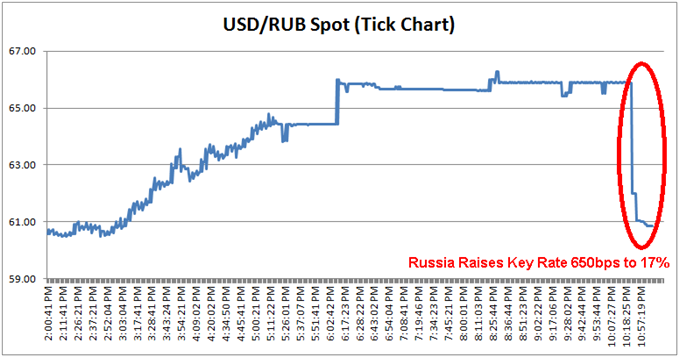 The Russian Ruble jumped over than 7 percent higher against the US Dollar after the Central Bank of Russia (CBR) raised interest rates by a hefty 650 basis points to 17 percent. The move follows a cumulative 250 basis points in hikes over the past two months, with the latest 100bps increase ahead of today’s announcement delivered just last week. The CBR said the move was designed to “stem devaluation and inflation risks”.

What is Behind Russia’s Sudden Rate Hike?

Russian officials have been scrambling to stem the currency’s aggressive slide, which hit yet another new record low against the greenback yesterday. Fighting depreciation is becoming increasingly costly, particularly as sinking oil prices are already putting pressure on government finances. Energy accounts for two-thirds of Russian cross-border sales and many of the exporting firms are state-controlled. In the meantime, FX reserves have slumped to the lowest level since October 2009.

Looking ahead, two possible scenarios emerge. The first sees Russia continue to throw money at the problem, bringing the country closer to a potentially disastrous budget crisis. Indeed, sovereign CDS spreads show fears of a Russian default are at their most acute in five years. Alternatively, the Kremlin could resort to capital controls to stem outflows punishing the currency (as we explained in detail previously), locking foreign funds onshore.

Needless to say, neither of these bode well for market confidence. The devolving situation is looking increasingly similar the Russian financial crisis of 1998. Then too, falling oil prices and dwindling FX reserves inspired the central bank to fight back with aggressive interest rate hikes. This proved fruitless, preceding a sovereign default and Ruble devaluation.

Investors surely recall the infamous collapse of Long-Term Capital Management, a hedge fund, in the wake of the 1998 debacle. The firm was so deeply intertwined with the global financial system that its collapse was seen as an existential risk for the markets as a whole. It was bailed out at the cost of $3.6 billion provided by 16 top Wall Street banks organized in the effort by the Federal Reserve.

Fearing a similar turn of events in an environment when policy tools have been severely depleted by the Great Recession, traders may begin to aggressively pull capital out of risky assets at large. Such a turn of events may result in a dramatic selloff across the asset class spectrum as capital pours into safe havens. In the FX space, that is likely to translate into gains for the US Dollar and the Japanese Yen against their major counterparts. Emerging-market currencies and high-yielders in the G10 complex (like the Australian and New Zealand Dollars) may prove hardest-hit.