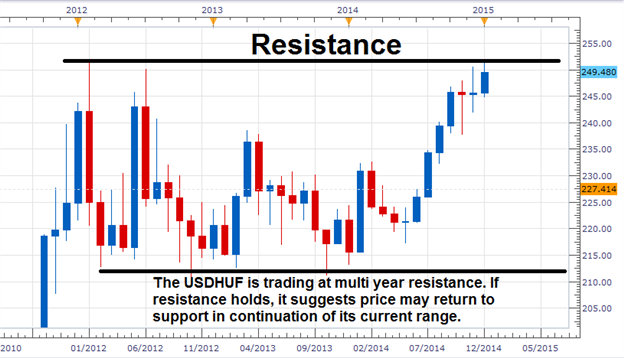 In the month of December, after reporting steady growth among various sectors within the national account, the Hungarian Central Bank elected to maintain the current base rate of 2.10%. Furthermore, a continued citation of growing domestic demand and falling external debt stands behind the committee’s decision to leave rates unchanged.

Domestic growth, as assed by the council is expected to follow a balanced pattern into 2015. With the final third quarter GDP reading remaining at the preliminary estimate’s level of 3.2%, growth was realized in the construction (+11.6%), agricultural (+10.8%), industrial (+5.6%), and service (+1.7%) industries. However, the volume of net exports remained at a deficit in October as imports (+2.3%) exceed the month’s exports (-2.1%). Still yet, while external demand was down in the tenth month, domestic demand remained strong, as industrial production in October increased by 1.7% year-over-year.

The financial market strikes a similar balance. While the funding for growth scheme is expected to promote corporate investment next year, declines in EU funding and weak global demand are to work in the opposite direction. Additionally, as the external position of the economy improves to 8% of GDP, the price level continues to decline.

The consumer price level in November decreased by 0.7% when measured year-over-year. The decline resulted from changes in the following categories: electricity, gas and fuels (-13.0%), local transport (-6.8%), clothing and footwear (-0.6%) and food (-0.2%). CPI has run below the level provided in September’s inflation report and is expected to continue to run below the target next year. However the disinflation is expected to diminish, leaving inflation to rise to 3% in the second half of the forecasted period.

Presently, USDHUF is trading at a multi-year resistance. If resistance holds, it suggests price may return to support in continuation of its current range.