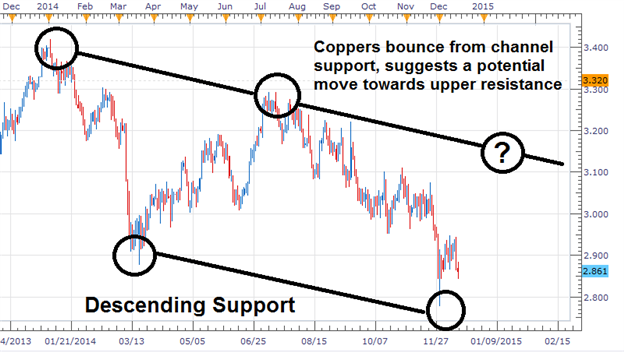 Following a 5 day descent in the last week of November, copper prices remained largely unchanged in the subsequent two weeks beginning December 1st and December 8th. Partially recovering from Monday’s low of 2.776, the high to low average in the first week of December was $2.88 per pound while that of the second week was $2.91 per pound. This moderate recovery has remained consistent throughout December as weak Chinese economic data has been offset by new stimulus measures, and strong US economic data outweighs weak Eurozone reports and the effects from excess copper inventories.

Weak economic data reported by China, the world’s largest importer of copper, does not bode well for the metal. Expanding below the 7.5% target, China’s 3Q GDP measured just 7.3% and has continued to show signs of contraction into the 4Q. Industrial production in November fell from 7.7 to 7.2 percent as factories in the northern region of China were closed to curb air pollution ahead of the Asia-Pacific Leader’s Conference in Beijing. Furthermore, exports expanded at a slower rate in November (4.7% compared to 11.6%) as imports fell by 6.7% on weaker domestic demand. With inflation falling to the lowest level since 2009 (1.4%), China’s manufacturing PMI contracted to 49.5 in December. However, to offset the contraction, the Chinese authority has ramped up stimulus measures by reducing the required credit deposit ratio among banks in an effort to boost credit loans and encourage economic growth.

Positive economic developments in the United States have also kept copper prices relatively stable, as they have offset weak Eurozone data and increases in the copper supply. Consumer spending, which represents about 68% of the US economy, increased 0.7% (MoM) and 5.1% (YoY) in November. Furthermore, construction spending increased 1.1% after contracting 0.4% in the month prior. Thus, favorable spending patterns stemming from a sound labor market were strong enough to balance out a drop in the Eurozone’s November PMI from 50.6 to 50.1 and counter the negative pricing pressures resulting from inventory increases. In total, globally located metal exchanges reported a weekly increase of 2.2% with the largest positive contribution coming from Europe (27.4%).

With economic developments fairly balanced between the world’s largest consumers of copper, the metal has since bounced from channel support, suggesting a potential move towards resistance.