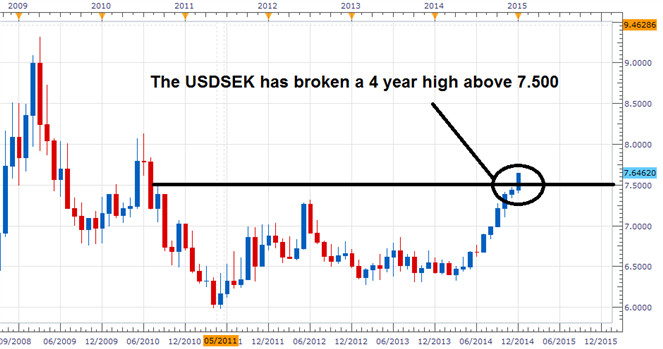 After cutting the interest rate to zero in October, Sweden has since faced growing pressure from the European Central Bank and Norway, who cut their rate last week, to engage in further monetary easing. With added political challenges regarding the budget at the forefront, The Riksbank is likely to hold interest at zero in December and potentially extend the effective rate beyond mid-2016. Tomorrow’s decision is expected to come following a period of relatively weak growth in Q3 and another round of negative inflation last month.

Net exports had a negative effect on GDP in the third quarter. The current account surplus fell by SEK 9 billion as a result of the trade surplus dropping to 36 billion krona from the 52 billion krona reported last year. Part of this imbalance arises from a fallback in productivity, despite an increase in labor market conditions. While the employment rate increased by 0.6% (YoY), as 81K additional jobs were added to the economy, capacity utilization declined in the third quarter by -0.2%.

Given this fall in output, household consumption has not been the driving force behind Sweden’s limited economic growth (+0.3%). In October, consumption increased by a mere 0.1%, with retail sales for clothing and footwear falling by 0.9%. Furthermore, October’s investment survey shows a volume decline of 10% relative to last year.

Thus, in the absence of a strong consumer demand base and investment block, prices have felt little pressure leaving inflation falling for the fourth straight month. Down from -0.1% in October, CPI measured -0.2% in November. The largest pricing decreases came from the following categories: international flights (-17.5%), packaged holidays (-10.3%), and interest rate costs (-1.7%). However, moving forward, CPI may see a boost if average housing prices expand in the three months December-February as they did in the three months September- November (+2.2%).

Whether QE and zero interest rates are enough to improve inflation remains to be seen as the USDSEK has broken a four year high above 7.500.