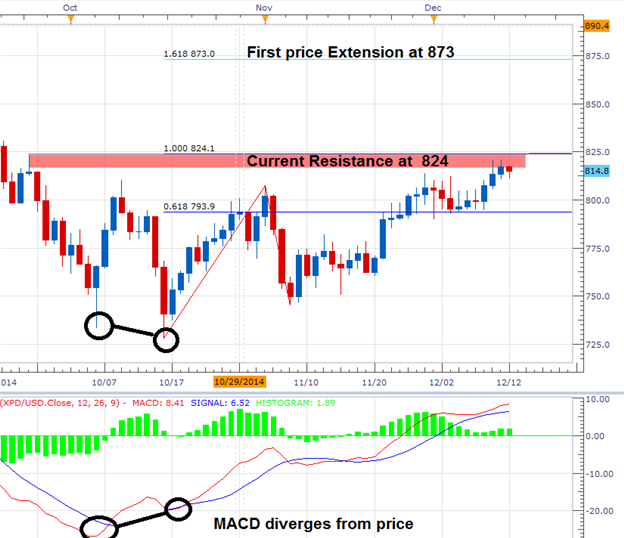 Among the precious metals, palladium has been the best performer year to date. From September’s high of 910 prices slid 19.5% before reversing the trend in October. Favorable supply and demand conditions—regarding the complementary relationships between petroleum, motor vehicles, and palladium—stand behind the shift.

With US Oil trading below 60 dollars a barrel households are seeing an increase in their purchasing power. Combined with an improved labor market, consumer sentiment consecutively increased in October (+2.3) and November (+2.9) influencing Octobers 0.2% increase in personal consumption. Of this increase in expenditures, a portion directly contributed to October’s global auto sales increase of 3.0%.

In line with the year’s average, US vehicle sales increased 6% in the month of October bringing the annualized total of units sold to 16.4 million. With the average age of vehicles on the road equal to 11.4 years, sales are expected to continue their climb out of both necessity and increased consumer confidence. Also increasing demand at a rate of 6.0%—Western Europe. Just below the all-time record of 2 million units, Canada also contributed to demand selling an annualized 1.95 million cars. However, in leading the advancement with 18.5 million units sold, it was who China continued their year-over-year double digit gains.

Greater demand for vehicles then translates into an elevated need for palladium, as the automotive industry consumes 67% of the metals supply. Used in catalytic converters, the metal aids in the exhaust system’s oxidation process. Thus as tighter emission standards, particularly China’s Beijing VI initiative, increase so will the demand for palladium. Furthermore, as demand shifts away from small cars, greater emphasis will be placed on fuel-efficiency in larger vehicles which have advanced at a slower rate—below 2.0% in October.

Conversely, production of platinum group metals on the whole has been outpaced by demand, as reported by two of the world’s leading palladium producers operating in Russia and South Africa. Impala Platinum, which produces 22% of the world’s supply of platinum, reported a first quarter PGM production loss of 25.5% between July and September. Operating primarily in the Bushveld Complex, the largest know PGM resource, Impala’s loss in production directly contributed to South Africa’s overall negative growth rate of 20.5% and more specifically to October’s 1.1% decrease (YoY). Norilsk Nickel, operating primarily in Russia, reported an increase of 5.5% on the quarter on 2.9% on the year. However, growth in palladium production still remains below that of demand which is expected, by Norilsk Nickel, to increase globally by 2% as the supply deficit doubles.

With demand exceeding supply throughout October, palladium prices have been supported. MACD divergence, from price on October 16th, has signaled the potential end of September’s downtrend. Currently price resides under resistance found at 824.A break above this value would suggest a continuation of bullish momentum to end the week.