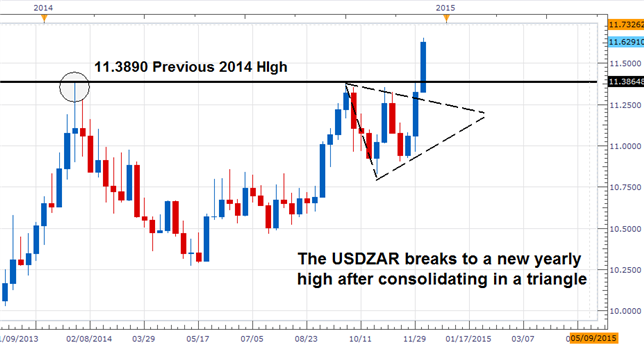 From the start of 2010 employment levels have been on an upward trend; September’s annual increase of 1.0% is of no exception. In descending order the segments providing the most substantial contributions are as follows: community services (3.0%), trade (1.2%) and finance (1.1%). Furthermore, total gross earnings among all industries increased by 4.6% on the quarter and 7.5% on the year.

With a five point improvement in October’s BER business confidence report, manufacturing production in the same month increased by 2.2%. The escalation was due to a higher production of motor vehicles/transport equipment (10.3%), food/beverages (2.1%) and petroleum/chemical products (1.6%). For the three months spanning August to October production increased by 3.8% and sales by 5.4%.

Also noting an upsurge in sales—the retail sector. For the month of October retail sales grew at an annual rate of 3.4%. The largest contributors to the rise were: general dealers (0.8%), clothing and footwear retailers (0.7%) and food/beverage specialty stores (0.6%). Within these categories food and beverages, household furniture and appliances, and hardware and glass recorded the greatest increases. On a month-over-month basis retail sales in October increased at a rate of 0.4%.

A slowdown in the volatile categories food and petrol drove inflation rates down to 5.8% in November from October’s level of 5.9%; food inflation slowed by 0.3% while fuel prices fell by 45 c/l. This decline places South Africa’s inflation rate more firmly inside the Reserve Bank’s inflation target of 3-6 percent.

However, despite these economic advances, the strength of the US dollar has pushed the rand to a new yearly low.