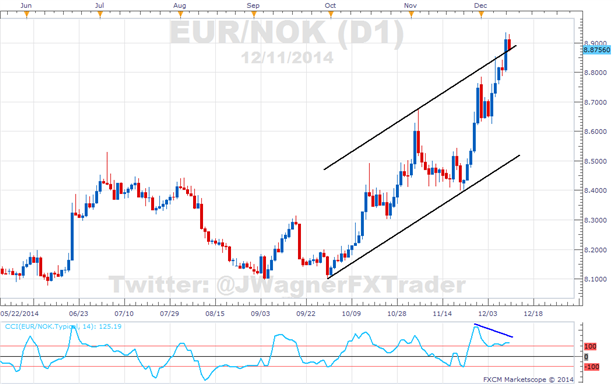 Norges Bank surprised investors today with a 25 bps cut in the key policy rate. After being held steady at 1.5% since March of 2012, the rate was reduced to 1.25%, to offset the effects from a drop in external commodity prices and a devalued krone. Furthermore, while present domestic conditions remain fair, growth prospects for the Norwegian economy have weakened.

Since the previous rate decision on October 23rd the krone has depreciated 7.7% against the euro and 10.6% against the US dollar. A large part of the devaluation is owed to OPEC’s decision to maintain their current output target of 30 million barrels per day, which sent oil prices down more than 13 dollars a barrel. As a result, current Norwegian oil revenues, denominated in US dollars, are increasingly unable to cover the non-oil budget deficit. In response, Norges Bank has adjusted their daily FX purchases for December by 50 million NOK, bringing the total exchanged to 300 M krone. Continued weakness in the price of oil will continue to draw down FX reserves and add disinflationary pressures to already weak inflation data.

The November Producer Price Index fell 2.8% below the October level, standing now at 234.7. Year-over-year the index declined 6.6%. The largest disinflationary pressures came from the extraction and related services industry (-5.8%) followed closely by the mining and quarrying sector (-3.4%). Additionally the price reduction within the natural gas and refined petroleum products segments (-0.5%) led manufacturing prices to fall by 0.4 percent. The prominent headline figure, CPI, also disappointed slowing 0.1% on an annual basis.

With the next publication on hold until March of 2015, the committee felt a rate centered within the 0.75-1.75 percent rage would best aid stable categories including PMI (+0.5) and unemployment (3.7%) and improve faltering categories including inflation, consumer confidence and GDP which slowed by 0.1, 3.1 and 0.6 percent respectively.

For the past 2-3 months, prices have conformed fairly well to the noted trend channel. However, yesterday prices broke above the upper end of the trend channel on diverging momentum through the CCI oscillator. This suggests a pause in the uptrend with a possible correction to follow. Should such a correction develop, levels of support include 8.78 and 8.68.