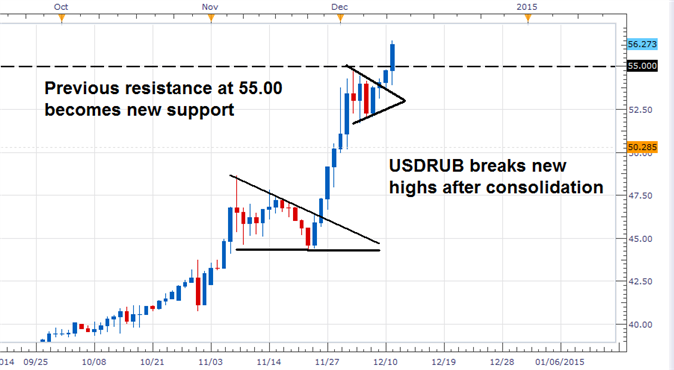 Whether driven solely by the market, speculation, or a combination of both the ruble has continued its slide against the Euro and the US dollar, compelling the central bank to take action. With inflation expected to reach 10% by years end, the CBR defensively raised interest rates today by 100 bps to 10.5%. The evolution of both domestic indicators and external conditions were factored into the bank’s decision. While tighter monetary conditions have yet to offset inflation in its entirety, they have laid the foundation.

Combined, the deteriorating oil market and political uncertainty surrounding Russia’s relationship with Ukraine have made profound impacts on the Russian economy. In protesting Russia’s presence in Crimea, western countries have since imposed a series of comprehensive sanctions against the former soviet country, limiting their trade flow of goods and capital. In doing so Russian borrowers have been faced with liquidity constraints and the population as a whole has been subjected to cost-push inflation.

In the former case a currency mismatch has arisen, where demand for dollars to repay foreign denominated debts has outpaced the need for rubles, thereby initiating a ruble selloff. In the latter case, import substitution has driven up the price level, forcing the bank to raise interest rates in accordance. While heightened interest rates have increased the propensity to save they have also restricted lending growth, as collateral requirements have become exceedingly high.

With few people borrowing for investment purposes annual GDP for the year is expected to be a mere 0.6%. Furthermore, while deteriorating external conditions have made goods more competitive, the trade surplus has narrowed (19%) as wage growth and retail lending have slowed. While affirming the new exchange rate mechanisms ability to help the Russian economy adjust more quickly to varying external conditions, the CBR also cited their intent to continue raising rates in conjunction with the mechanism until the mid-term inflation target of 4% is considered achievable.