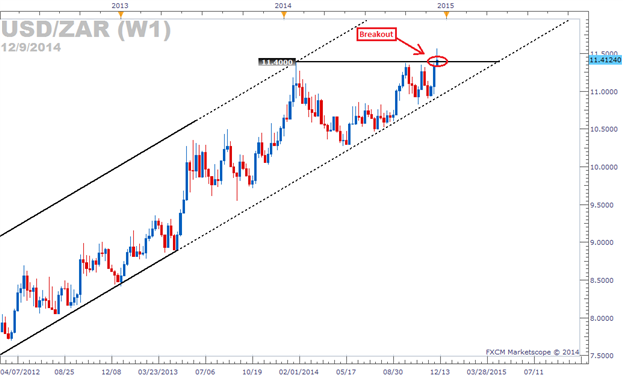 Following four months of negative growth the South African mining sector rebounded in September, only to retreat again in October. As a vital contributor to GDP, this decline in mining output has done little to strengthen the rand. However, with a positive correlation to production (0.43) mineral sales for September did increase year-over-year by 0.4%.

Mining production decreased 1.1% in October (YoY), but increased 0.5% (MoM) when seasonally adjusted. Furthermore, in comparing the three months August-October with May-July, production volume increased 3.1%. The largest negative growth rates were recorded for PGM (-20.5%), copper (-10.8%), and gold (-1.4%), while iron ore notably made a positive impact (+2.7%). Conversely, mineral sales increased 0.4% (YoY) in September and 5.8% (MoM). The three month comparison, when seasonally adjusted, also increased at a rate of 2.4%. A closer look at the mineral groups—gold, PGM, and copper—provides a more detailed analysis of individual industry contributions.

Month-over-month, the seasonally adjusted volume of production index for gold in October was down 0.9%, while its year-over-year counterpart was down 8.9%. However, the volume production index was up 0.3% between August-October relative to May-July. In contributing to the year to date loss in mineral sales of 1.8%, gold sales in September were disappointing at - 4.6%.

Copper production increased 9.4% (MoM) in October and 6.3% during the months August-October when compared to 3 months prior. Despite the recent increase, copper remains down on the year by 10.8% in terms of production and 6.9% in terms of sales.

Seeing the largest increase in volume of production, platinum group metals were up 20.3% from Aug-October, contributing 2.8% to the overall three month increase of 3.1%. Month-over-month volume increased by 6.5%, while year-over-year it still remains down 20.5%. Sales on the year also remain negative at 12.2%.

USD/ZAR was finally able to break above R 11.40 and made a new high of R 11.57. We’ve seen a pullback today towards this resistance level which could now act as support. If price dips back below R 11.40, bullish traders should not be discouraged unless we see a clear break below the lower channel line as well.