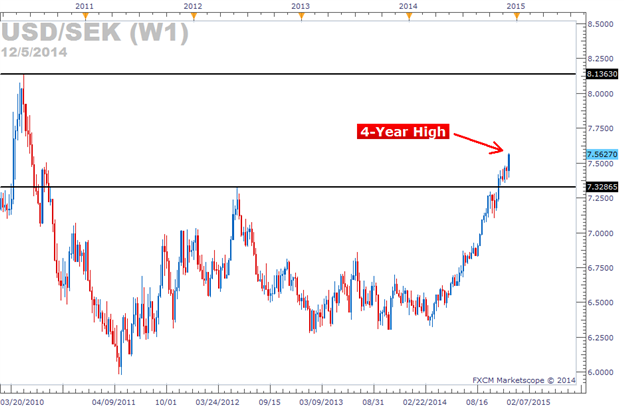 Ahead of Thursday’s Average Housing Price release, the SEB Housing Price Indicator dropped in November while industrial orders and household consumption each experienced a moderate increase in October.

On the heels of a 0.8% decline in the service production index, Industrial Orders were elevated in October, providing a more positive outlook for the Swedish economy. New orders increased by 3.7% (MoM) and 1.6% (YoY). The main driver—increases in demand for “other transport equipment”. Additionally, total industry in the domestic market increased by 10.5% while the export market only fell by 1.1%. However, it is important to note that while October experienced an upturn, figures from August to September were revised down 0.2% for a total decline of 1.2%.

Household consumption also rose in October, up 0.1% from September when seasonally adjusted. Year-over-year, consumption volume and working day hours were reported to have increased by 1.8%. The main components driving the change include: Post and Telecommunications (10.6%), Accommodation Services (6.1%), Household Equipment/Furnishings (5.9%) and Retail Trade (5.1%).

However, while overall household consumption increased, demand for housing was not strong enough to change expectations of future home prices. Sixty-seven percent of those surveyed believe home prices will rise while ten percent believe they will fall. Thus, despite the central bank’s zero key policy rate the SEB housing indicator dropped to 57 in November from 59 in October. Also reported by the leading Nordic financial services group; an increase in those consumers wanting fixed rates (+3.0%).

USD/SEK currently sits at a 4-year high without much resistance in its way. With the strength in the US Dollar and the general weakness of Swedish Krona, It would not be surprising to see USDSEK test its prior high around 8.13 kr in the months ahead.