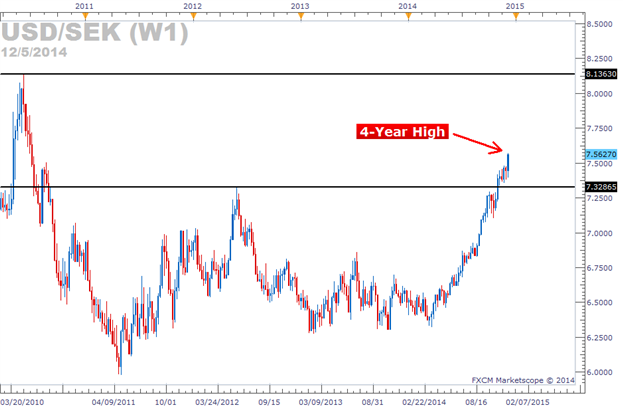 In October, Sweden’s coalition government submitted their 2015 budget proposal. Contending with the state’s welfare needs, the plan included an option to spend 26 million krona on reforms for jobs, education, and environmental/climate stability. Following the proposal, the Ministry of Finance released their guidelines for 2015 central government debt management. It was pledged in the policy to shrink foreign exchange exposure in the immediate years to a level under 15%, while still maintaining the same maturity on existing debts. Thus expanding the budget at this point may run in opposition of Finance Minister, Magdalena Andersson’s most recent balanced budget timeline of 2017. With the new proposal facing growing political opposition and the present budget deficit standing wider at 2.2%, a decelerating current account surplus and disappointing industrial production data are unlikely to lend the budget any aid.

The third quarter current account surplus amounted to SEK 62 billion, significantly less than the figure of 71 billion reported last year. The largest contributing factor to the decline was a reduction in the net trade surplus relative to the 52 billion krona recorded last year. In 2014 total trade amounted to only 36 billion krona—20 billion in goods and 16 billion in services. The largest drain on trade came from a reduction in travel services. Furthermore, the net liability in international investment positions was increased in the quarter by 33 billion krona (YoY).

The decline in the services component continued into the fourth quarter with the service production index declining by 0.8% in October. The largest contributing factors in the month-over-month decline were wholesale trade (-5.4%) and education (-4.3%). Industrial production also produced disappointing data increasing marginally in October by 0.2% (MoM) and 0.1% (YoY). The largest increase came in the petroleum industry (+10.1%) which was natural given the temporary cease in production one year prior.

USD/SEK currently sits at a 4-year high without much resistance in its way. With the strength in the US Dollar and the general weakness of Swedish Krona, It would not be surprising to see USDSEK test its prior high around 8.13 kr in the months ahead.