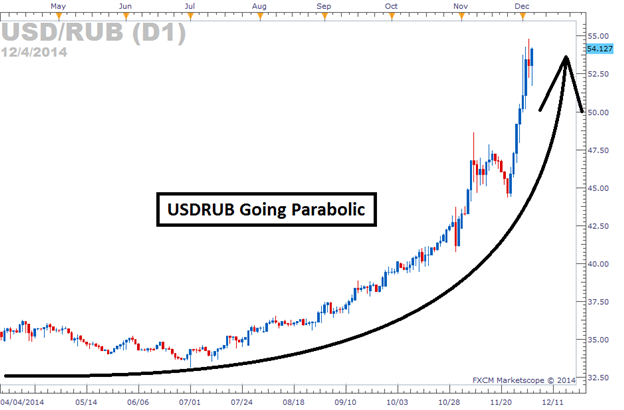 A sharp spike in the USD/RUB on December 1st necessitated a central bank intervention and invoked follow- up commentary during President Vladimir Putin’s annual address to the Federal Assembly. In spite of moving to free-float the ruble, the CBR was left with little choice but to revert to old tactics, intervening once more in the FX market. Their efforts to stabilize the currency were praised by Vladimir Putin during his assembly speech. Also addressed by the Russian leader—landmark events, notably Crimea, and Russia’s investment climate within a legislative framework.

In a November 28th press release, the CBR announced their intent to enforce the 2 billion USD limit on the amount of ruble liquidity provided. First introduced on November 11th, the action was meant to limit speculative activity and reinforce FX market stability. The renewed initiative went unnoticed.

As a result, immediately following the spike on December 2nd the CBR sold 700 million USD in a bid to overcome sellers and curb the USDRUB advancement. The transaction brings year to date FX reserves spent defending the ruble to nearly 74 billion dollars. Taking additional measure, on December 4th, the central bank set the minimum interest rate on all FX repos equal to the LIBOR + 0.5%. Further intervention may be executed without notice, as the ruble has deviated substantially from fundamentally reasonable values. Further analysis should come from the key rate decision to be held on December 11th.

Also making waves this week—the Russian Ministry of Economic Development and Russian President Vladimir Putin. Early this week Deputy Economy Minister Alexei Vedev conceded, that given recent developments, GDP could fall to as low 0.8% next year. This statement comes in the week following Economic Development Minister, Alexei Ulyukayev’s projection of 1.2% given during the parliamentary hearings of the Federation Council. With economic sentiment surrounding the economy quickly changing, Putin set out the provide reassurance during his annual address today to the Federal Assembly.

Two topics were of prominence during the president’s speech at St. George Hall: the state of Russia’s investment climate and the relationship between Russia and Crimea. In support of the CBR, Putin proposed amnesty for capital returning to Russia. The goal, to repatriate much of the more than 125 billion in capital reported to have already fled the country. As incentive, those participating will not be subject to legal proceedings or criminal interrogations.

Sticking to the investment theme, the president also highlighted Russia’s financial commitment to the wellbeing of Ukraine. In addition to the energy company, Gazprom’s, 5.5 billion dollar contribution, the Finance Ministry has invested 25 billion dollars in the former Soviet state. Direct reference was also made to Ukraine’s Crimean Peninsula which is said to be “of strategic importance for Russia as the spiritual source of the development of a multifaceted but solid Russian nation and centralized Russian state”. In likening the region to the Temple Mount in Jerusalem Putin emphasized the historical importance of Crimea and reiterated Russia’s desire to work with partner nations, but their willingness to act unilaterally in protection of their legitimate interests.

Given the elevated level of uncertainty, Russia’s currency continues to depreciate at a rapid pace. With the USD/RUB going parabolic, risks are heightened, making trading in either direction dangerous.