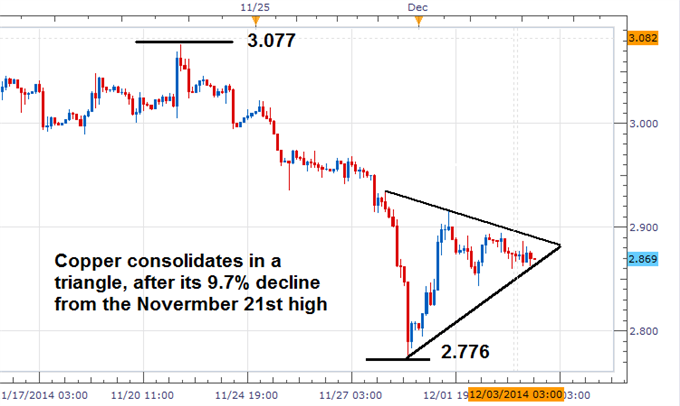 After opening last week at 3.037 $/lbs. cooper has since traded as low as 2.776 $/lbs. The 26 cent discrepancy can be explained by OPEC’s recent actions as well as a series of disappointing data in two of the world’s principal producers and consumers of copper—China and the United States.

An economic slowdown in China, the world’s largest consumer of copper, initiated a drawback in the metal’s price. Following a quarter in which growth slowed from 7.5 to 7.3 percent, and a month in which industrial production fell from 8 to 7.7 percent, the People’s Bank of China transitioned to an active monetary policy, cutting the bank deposit rate by 0.25%. On the first trading day following the rates November 22nd implementation, Cooper began its week long descent. With demand down 5.8% (YoY), pricing pressures are likely to remain subdued.

A further extension to the initial price decline, following China’s rate announcement, occurred after the November 27th OPEC met in Vienna, Austria. By the conference’s conclusion the 12 member nations ruled out a production cut, in favor of retaining the current output target of 30 M b/d. As a result, oil prices immediately fell $5.81 a barrel and have only partially recovered over the ensuing three trading days. With oil prices suppressed, investors became incentivized to move their earnings to fixed income instruments, thereby leading to an appreciation of the US dollar. A stronger dollar then reduces the demand for mining commodities traded in the relatively more expensive US dollar. In the one day directly following OPEC’s announcement copper traded 10 cents per pound lower.

Subsequent to the lowest US consumer confidence report (88.7) in five months pricing losses were further magnified. Additionally, new orders for non-defense capital goods were down 1.3% in October, likely reducing the demand for copper. However as the 4th largest producer and consumer of copper, a greater than expected increase in October’s US construction spending (+1.1%) may indicate an additional demand for copper moving forward.