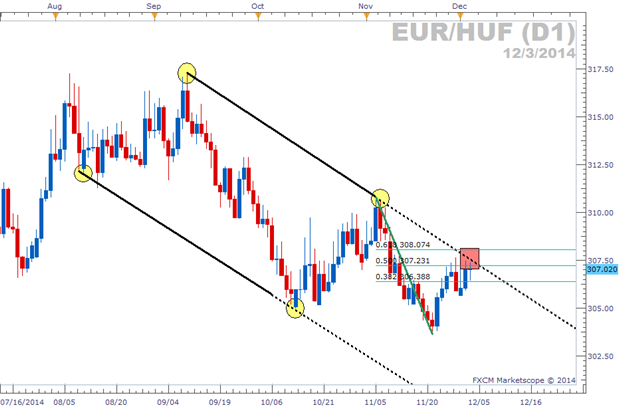 On November 25th the Hungarian National Bank elected to maintain the base rate of 2.10% under the notion that economic growth would progress as domestic demand strengthened. Patient monetary policy appears to have invoked a positive response from the Hungarian economy as reflected in the latest round of GDP, PMI and Retail Sales figures.

The final third quarter GDP reading remains at the preliminary estimate’s level of 3.2%. Growth was realized in the construction (+11.6%), agricultural (+10.8%), industrial (+5.6%), and services (+1.7%) sectors. Noticeable impacts came from the manufacturing of motor vehicles and trailers as well as the construction of new buildings and civil engineering projects. Furthermore, capital formation was up 19.1% year-over-year as was final consumption expenditure (+1.1%). While external trade negatively impacted growth by 1.7%, a surplus equivalent to 685 billion forint was still charted.

While substantial, Q3’s trade surplus was outpaced by September’s final trade balance which generated a surplus of 939 million forint. The excess currency came despite the volume of imports (+10%) edging out that of exports (+9%). September’s additional 85 million HUF (YoY) resulted mainly from a greater export of machinery and transport equipment relative to imports.

Growth was also established through a slight increase in the manufacturing PMI from 55.0 in October to 55.1 in November. Expansion in the sub-indices—production quantity, new orders, and purchase prices—contributed to PMI’s 16th consecutive month above 50. Growth was also noted in the export sector. Caution however, should be taken as the employment index contracted below 50 for the first time since July of 2013 and the Eurozone PMI fell to 50.1, below the flash reading of 50.4.

EUR/HUF is approaching a major resistance level inside its current price channel. This resistance area coincides with the 50% - 61.8% Fibonacci Retracement levels. Their confluence gives us a bearish bias towards the EURHUF unless it is able to break above 311 forint. The current price channel shows a drop could move down to 300 forint or below, giving this opportunity a positive risk:reward ratio.