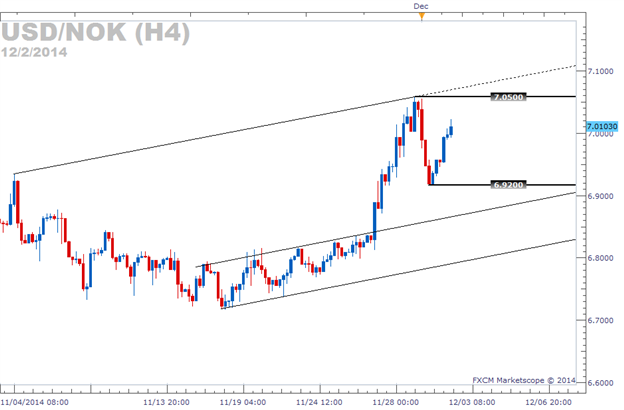 Following OPEC’s decision to maintain their current output target of 30 million barrels per day, oil prices have since dropped more than 9 dollars a barrel. In response Norges Bank, has adjusted their daily FX purchases by 50 million NOK to assist the Norwegian economy which is already showing signs of recovery based on a series of positive economic indicators.

Norges Bank first deviated from their current purchase trend in October, at which point they commenced the sale of foreign exchange equivalent to 250M Krone on a daily basis. The acquired Krone was then used to cover the non-oil budget deficit in accordance with the petroleum fund mechanism. However, given USOil’s continued descent, current Norwegian oil revenues, denominated in US dollars, are increasingly unable to cover the non-oil budget deficit. As a result, throughout the month of December Norges Bank will sell foreign exchange equivalent to 300 million NOK on a daily basis. This bid to correct short term imbalances in the net cash flow will likely help stabilize the currency, along with improved unemployment, retail sales and PMI figures.

Compared to August, unemployment in September remained stable at 3.7%. Additionally, while employment as a share of the total population (aged 15-74) remained unchanged at 68.4%, the number of employed persons increased by 7,000 from June-September.

Between September and October retail sales also saw an increase 0.6%, following a decrease of 0.1% in the month prior. The increase is mainly attributed to an increase in sport/leisure equipment sales as well as audio and video equipment sales. Declines in clothing, shoe and book sales produced a slight drawback in the retail index.

Manufacturing PMI also registered an increase from October (50.8) to November (51.3) of 0.5 points. Three of the five categories assessed measured and increase: new orders (+0.5), employment (+3.5) and inventories of materials (+1.8). The remaining two categories –production and suppliers delivery- each declined but remained above 50, suggesting growth but at a slower pace than in October.

USDNOK has recovered 75% of its drop from earlier in the week. US Dollar remains bullish as it approaches its prior high of 7.05 kr. At its current level around 7.01 kr, it is difficult to justify immediate action, but there could be an opportunity on the horizon if price dips again or if price breaks well above 7.05kr.