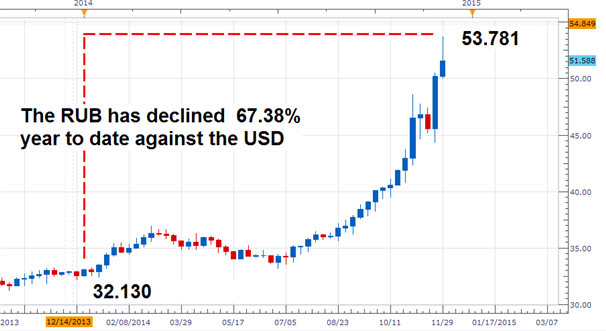 Amidst its search for price stability, the oil market went without reprieve following the conclusion of the 166th OPEC Conference in Vienna. At the November 27th meeting, the 12 oil-exporting members agreed to leave the output target unchanged at 30 million barrels per day, a figure first implemented in 2011. After assessing the market’s outlook, definitive cuts in specific nations could not be established. This outcome likely indicates that OPEC is no longer able to balance the market alone—they need the aid of non-OEPC producers Mexico, Norway and Russia.

Despite expectations of a drastic cut, similar to the 2.2 million b/d reduction in 2008, OPEC was unable to devise an agreeable plan to constrict the future oil supply. Instead it was determined that price stability could be achieved without the loss of any one nation’s market share. The conference thus concluded that prices were not suppressed enough to inhibit economic growth nor deter the reinvestment of profits. Their statements credible, given November’s market report which cites global economic growth as steadily increasing from 3.2% in 2014 to 3.6% in 2015.

Furthermore, alongside GDP growth, demand for oil in 2015 is to increase by 1.1 million b/d while the population is to rise from 7.1 to 9 billion by 2040. With more than 60% of the population expected to live in cities the demand for cars, which is intrinsically linked to economic oil needs, is set to increase. However, escalated demand is to be offset by an increase in non-OPEC production equal to 1.36 million b/d and a 2.2% annual decline in average oil used in motor vehicles. Given this apparent growing role of non-OPEC producers in achieving equilibrium, OPEC President HE Abdourhman Ataher Al-Ahirish, emphasized, in his opening remarks, the need to collaborate and engage in dialogue with non-OPEC producers and oil companies in order to achieve price stability.

Perhaps no collaborative relationship is more important than that with Russia, the world’s largest exporter of petroleum products. Prior to attending the OPEC conference, Russian Energy Minister Alexander Novak stated that Russia intends to maintain oil production at a level of 505-520 million tons a year (10 million b/d). Any reductions would thus not be contrived, but the result of natural forces; forces unlikely to arise given the economy’s present state as noted by CBR Governor Elvira Nabiullina during a Federation Council meeting.

With the strategic goal of achieving low inflation near 4%, Nabiullina emphasized the need for Russia to take advantage of a weak ruble in creating opportunities for export growth and import substitution. From the November 27th one day loss of $5.81 per barrel the USDRUB has since surged from 46.623 to 53.781 causing the ruble to lose 15.35% of its value. With a further weakened ruble, Russia may see continued advances in select economic indicators including PMI which rose 0.5 points in November to 51.6.