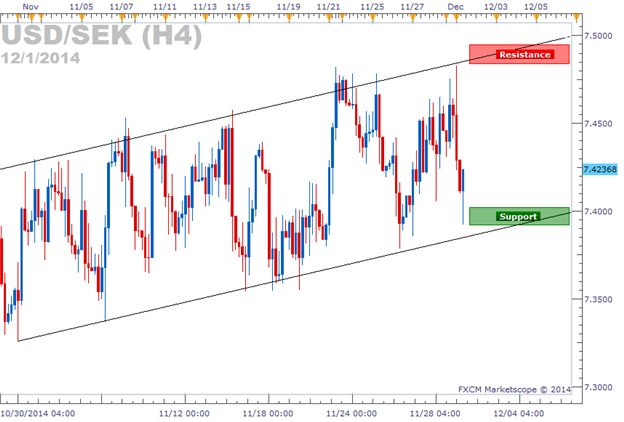 Widespread expectations regarding Sweden’s future economic state remain considerably pessimistic given the National Institute of Economic Research’s more positive than normal assessment of the current situation. Despite reported declines in the trade balance as well as consumer and manufacturing confidence, a reading of 103.6 for the Economic Tendency Indicator was sufficient enough to diem the current situation ‘strong’—one level above ‘normal’.

Reported by Statistics Sweden, the trade balance in October was -0.2 billion SEK. Exports were valued at 103.1 billion Swedish Krona while imports totaled 103.3 billion krona. Compared to 2013 that is an increase of 6% for exports and 10% for imports. When analyzed from a regional perspective, trade with countries outside of the EU resulted in a surplus of 12 billion SEK while trade with the EU resulted in a deficit of 12.2 billion SEK. An imbalance also arises when measuring net trade from January to October. While exports increased 3%, imports increased by a greater magnitude at 7%. As a result, the gap between imports and exports has declined sending the 10 month net surplus down to 20.5 billion krona in 2014 from 48.2 billion krona in 2013.

In retaining a trade surplus the Economic Tendency Index firmly remains 3.6 points above the historical average despite falling 0.5 points in November. Manufacturing was the only confidence indicator to gain (+0.6) while construction (-0.7), services (-1.3) retail (-1.7) and consumer confidence (-0.8) each fell. Manufacturing likely received a boost from a 1.3% annual increase in capacity utilization when compared to Q3 in 2013. In contrast consumer confidence declined on negative contributions from consumer expectations of the Swedish economy over the next year. Inflation expectations one year out declined in November by 0.3% while the household outlook for interest rates 1, 2 and 5 years out decreased by 0.36, 0.37 and 0.23 percentage points respectively.

The USDSEK has done nothing but go up for the past 9 months. Current support sits around 7.40 kr with resistance near 7.50 kr. This gives traders a nice trading range to participate in. If we see a break of this price channel, we are more confident in trades in a bullish direction.