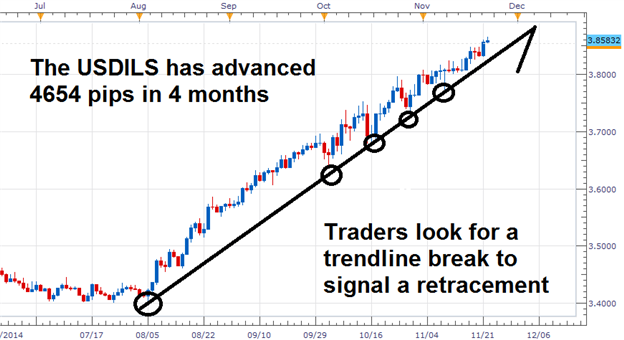 In facing short and long-term challenges to economic growth, the Bank of Israel voted to retain their present accommodative rate of 0.25% for the month of December. Recovery post Operation Protective Edge has been moderate as shown by the national account as well as the labor, credit and capital markets. In believing that the previous rate reduction has not been fully realized by the market, focus has shifted to small improvements within otherwise disappointing data.

Resulting from a 4.4% decline in exports and a 77% drop in tourism services, GDP, as a whole, declined 0.4% in the third quarter. However, the Composite State of Economy Index increased 0.1% in October based off a rise in the production index (+1.4) and exports (+1.9%). Additionally, while the 12 month inflation expectation was halved from 0.6%, CPI rose by 0.3% in October, which was above the forecasted 0.2%. Furthermore, the Central Bureau of Statistics reported a 0.2% growth rate for the October Climate Index despite the Purchasing Manager’s Index declining 1.6 points to 48.3, a level below the 50 threshold.

Following a similar one step forward two steps back approach are the labor, credit and capital markets. While headline unemployment increased by 0.3%, the rate amongst those of the principle age group (25-64) remained steady at 5.3%. In the credit market, while the housing component of CPI increased by 0.2% in October, the debt level for corporate establishments and individuals increased on a 1% depreciation of the Shekel against the US Dollar. In the capital market the yield differential on 10Y Israeli government bonds and the US Treasury remained unchanged, while the Tel Aviv index increased by less than the global average.

Moving forward, with favor given to the moderate advancements, the probability of further interest rate reductions is lower when compared to the timing just prior to the October 27 meeting. Traders will look for a trendline break to signal a retracement as the USDILS continues its advancement.