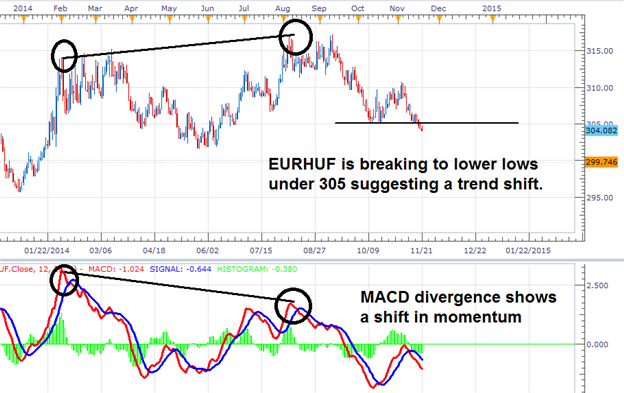 Hungary to Maintain Key Rate at 2.1% as EUFHUF Breaks to Lower Low

Concluding remarks from the Hungarian Central Bank’s October Minutes note the likely continuation of economic growth in achieving the mid-term inflation target, if current monetary policy conditions are upheld for an extended period of time. It is therefore likely that the MPC will maintain the key rate of 2.1% at the upcoming November 25th rate decision. The likelihood remains strong given a favorable growth report and increasing confidence, among market participants, in domestic economic conditions.

Following an increase in Q3 GDP (+3.2%), economic sentiment, as measured by GKI Economic Research, improved in all business sectors excluding trade. After five consecutive negative readings the index reversed course in October coming in at +1.2. The Business Confidence Index also saw an increase, rising from 3.6 in September to 7.8 in October; industrial production (+7.6%) and export sales (+8.0%) are the prospective drivers. A newfound confidence was also present among consumers, as gross earnings in the national economy grew by 5.2% in the months January to September. The consumer confidence index increased from -19.1 in September to -17.6 in October, well above the long-run average of -33.0.

While economic sentiment is on the rise, the annual growth report, as presented by Adam Balog, highlights not only developments to the upside, but also reveals the presence of downside risks. The definition of sustainable growth has changed in the aftermath of the financial crisis. With excessive and unsustainable debt ratios to no longer be acquired, Hungary has been forced to modify their growth ratio. While such a contraction in government spending may lead to protracted weak demand there have been positive results.

With the budget stabilized below 3% of GDP, the external financing capacity of Hungary has improved as has the country’s gap between GDP and GNI. Growth has been further balanced by an increase in household savings and lower commodity prices which have been more favorable for trade. Furthermore, with central banks committed to low interest rates, financial asset portfolios have become increasingly sensitive to interest rate changes. Thus until tightening cycles begin, investors may be swayed to invest in risker EM assets to meet profitability requirements. If additional investment reached 25%, than a more expedient growth rate of 3.5-4.0% could be achieved. However, based on present investment levels, growth is only projected to be 2.5%.