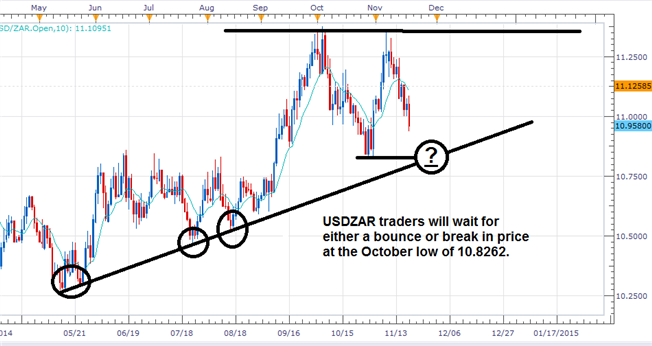 Unanimously, Reserve Bank Governor Lesetja Kganyago and the remaining MPC members elected to retain the current repurchase rate of 5.75%. The decision follows a balanced view of inflation expectations, the rate of normalization in advanced economies and the path of South Africa’s domestic economic state.

A benign global inflation environment has naturally kept headline inflation within the 3-6% target. In particular, October’s CPI, which remained steady at 5.9%, was influenced by lower oil prices, as was PPI which declined from 7.2% in August to 6.9% in September. Consequently, CPI for the year is estimated at 6.1%, down from the prior forecast of 6.2%. Future projections also came under revision with 2015 averages down from 5.7% to 5.3%. Furthermore break-even inflation rates declined for bonds of 5 and 10 year maturities—a narrowing indicative of lower inflation expectations. Mid-term headline inflation however, still faces downside risk as effects from lower oil prices may dissipate and core inflation pressures continue to persist (+0.1%).

While CPI has remained steady, the Rand has been relatively volatile since the previous rate decision on September 18th. The currency has moved intermittently on diverging growth patterns among the advanced economies. While the US and the UK are driving growth with better than expected 3Q GDP rates of 3.5 and 2.8 percent respectively, Japan and the Eurozone have contracted, prompting the reconsideration of a second VAT increase in the former and further monetary easing in the later. Changes in these policy stances abroad will likely invoke a response from the SARB as the rand remains susceptible to shifts in global sentiment.

While domestic growth remains largely subdued, positive underlying trends have presented themselves. PMI edged above 50 in October, placing the manufacturing sector in a growth phase, while the RMB/BER business confidence index was bumped up 5 points to 46. Sentiment among retailers was up 11 points following a growth in retail sales of 0.9% on the quarter and 2.3% on the year. Mining production also saw a rebound, up 5.3% (YoY) in September. Furthermore, the number of open credit lines extended to the household and corporate sectors improved by 3.7% and 15.3% respectively. Offsetting much of this rise in personal consumption was a limit to government spending, as officials seek to reduce fiscal deficits from 4.7 to 3 percent of GDP. As such GDP expectations for the year have been marginally adjusted down from 1.5% to 1.4%.

Respecting resistance USDZAR traders will look for price to break or bounce from the October low of 10.8262.