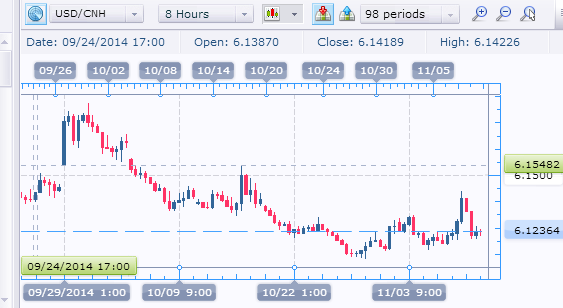 China’s Steady CPI, Falling PPI, and a Widening of the Trade Surplus

According to the National Bureau of Statistics of China, the Consumer Price Index, a measure of consumer related/retail price fluctuations within a basket of goods and services stayed at 1.6%, consistent with the 1.6% result produced in September of this year. Inflation rates have averaged around 5.6% from February 1986 to September 2014 however, in the year 2014 alone inflation has averaged around 2.9%. Inflation, or the relative increase in the general level of prices for a basket of goods and services, is measured in many different ways specifically the Consumer Price Index and Producer Price Index both are excellent indicators of rising or falling prices. In China, the most important aspects of the CPI basket are Food 31.8%, Housing 17.2%, Education 13.8% Transportation and Energy 10%, and 9.6% for Healthcare. China’s Consumer Price Index has been on a downward trend from 103.2 in October of 2013 to 101.6 in September of this year, over this period of time the CPI index averaged 102.3.

While China’s CPI remained stable, its Produce Price Index or PPI fell for the 32nd month in a row to 2.20% in October 2014. PPI measures several indexes to obtain the average selling prices received by domestic firms that produce goods and services. In line with the principles of CPI, PPI measures the price fluctuations that producers feel. In concordance with a decrease in PPI of 2.20%, China’s trade surplus expanded to new lengths as commodity prices continued to fall making them even more attractive in relation to other goods and services. In contrast with the USD, China’s trade surplus increased to 31.0 billion in September 2014 from 15.2 billion last year. Consistent with this increase, imports also rose 7% in September.