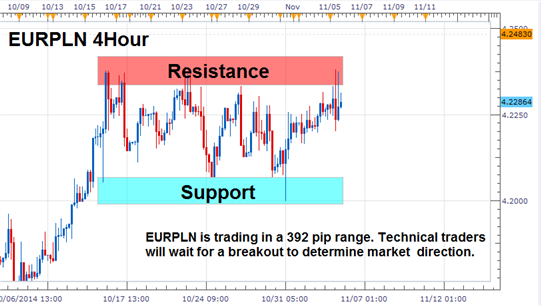 The National Bank of Poland’s MPC concluded that in spite of absent demand and cost pressures moderate economic growth will suffice in limiting the risk to inflation running below the mid-term target of 2.5%. As such the council elected to keep NBP rates unchanged at 2.0%.

Analysts took the glass half empty approach expecting the NBP to cut rates by 25 basis points, citing the continuation of the same downside risks present when rates were cut 50 bps on October 8th. Furthermore they assessed the need for additional accommodative easing to relieve burdens placed on the financial budget which must cut deficits to levels below 3% of GDP as per EU requirements. Also highlighted was the extended period of a negative PPI, making it hard for SME’s to adjust to an environment of falling prices.

In contrast, led by NBP President Marek Belka, the MPC took the glass half full approach, citing the continuation of moderate economic activity and a favorable economic growth to inflation risk distribution as reasons to maintain the current rate. Robust growth in the Unites States in combination with the Federal Reserve’s decision to end their asset purchase program is expected to counterbalance the declining or halted growth in the Eurozone, China and Russia. Furthermore from a statistical standpoint, the economic growth and inflation risk distribution indicates a 50% probability that inflation in 2015 will be between 2-3.7%; a spread which covers the 2.5% target. However, if the distribution falls below targeted levels further adjustments to the key rate have not been ruled out.

While the zloty has tracked the Euro lower against the US dollar through much of 2014 the EURPLN has recently begun trading within a 392 pip range, leaving technical traders to wait for a breakout to determine the markets next direction.

Euro and Zloty Movement Against the US Dollar 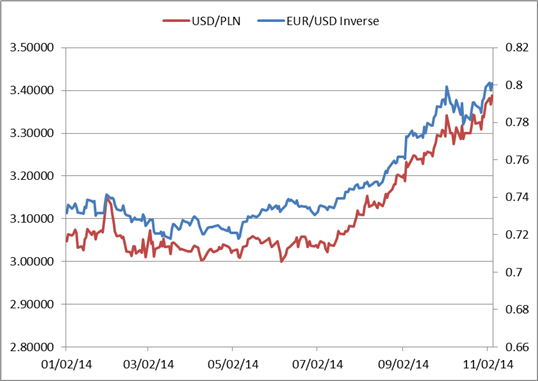