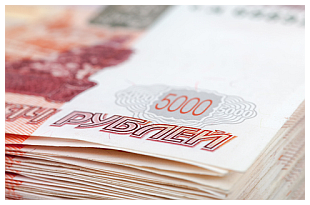 USD/RUB No Sign of Slowing Despite Improved Business Climate

Today, the World Bank released their 2015 Doing Better Business Report, ranking Russia 62 out of 189 economies reviewed; this marks an advancement of 2 places over last year and 30 over the 2013 index. While the survey accounts for business sector reforms, it does not extensively acknowledge the risks associated with macroeconomic stability, fiscal management or the resilience of financial systems.

Mirroring increases in the ease of conducting business, Russia’s distance to the frontier increased from 65.01 to 66.66, placing the country just below the regional average in Europe and Central Asia. The improvement in this standardized indicator specifies that on average the distance between the Russian economy and that of the best performer decreased. The narrowed gap results from improvements made in the two sectors most responsive to reform—Starting a Business and Registering Property.

Post reforms, the capital investment needed to start a new business as a percent of income per capita is lower in Russia (1.2) than in both Europe & Central Asia (5.3) and the OECD (3.4). Additionally with new business density remaining steady at 4.3 GDP is expected to progressively increase from 0.5% this year to 1.5% in 2015 and 2.2% in 2016.

However, in reflecting the situation as of June 1st, the report does not incorporate the potential slowdown in reform momentum and trade associated with Russia’s involvement in Crimea nor the current four month downtrend in oil prices. As a result of such negative shocks the Ruble has lost 28% of its value against the USD despite FX interventions from the CBR. In response many businesses are likely postponing expansionary activity, instead choosing to hedge against currency risk through the purchase of dollars and euros.

From a technical perspective, this development leaves the USDRUB at an interesting price level. The most recent leg higher from July 2014 is 1.618 times the length of the Sept 2013 – Feb 2014. This is a common wave relationship and would suggest that some type of reaction lower is more likely. The wave relationship doesn’t indicate how low, but that a reaction is higher than normal.

However, based on the fundamental backdrop, any weakness will likely prove temporary as the trend is clearly higher in what appears to be a third wave. Third waves in Elliott Wave terms tend to be the strongest and longest and the Relative Strength Index (below the chart) is showing no signs of slowing momentum.

If prices do consolidate, strong support is found well below current levels near 39.0. 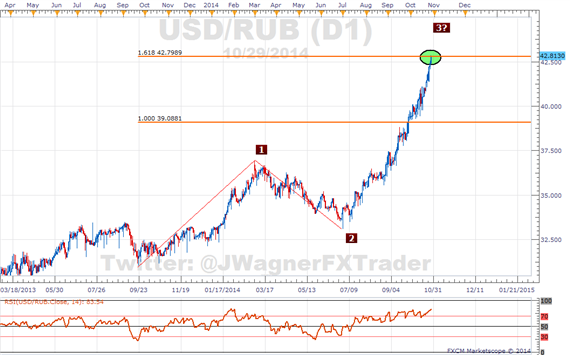