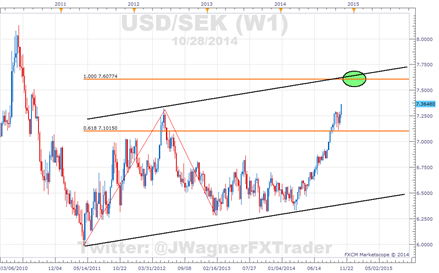 Riksbank’s six member executive board slashed interest rates by 25 percentage points today, bringing Sweden in line with those countries at or near zero. The repo rate is expected to remain at zero until distinguished inflationary pressures arise, likely in mid-2016. The deposit and lending rates also came under a 25 bps cut, bringing them to -0.75 and 0.75 percent respectively. In driving the decision differing economic activity and low inflation remain culpable.

In attaining sustainable growth and high employment, GDP in Sweden increased year-on-year by 2.6% in Q2, while unemployment successively fell over the last 3 months, settling at 7.2% in September. These positive developments however, have been overshadowed by consistently low inflation— 0.2% (July), -0.2%(Aug),and -0.4(Sept). Inflation remains well off the targeted 2.0% due to a decline in the prices of food, interest costs and international flights. Weak productivity growth has also failed to induce inflationary pressures as labor costs have increased by 6.4%, yet hours worked have escalated less than 1.8%. In addition to reviewing resource utilization and transitory effects the central bank also took into account international activity prior to making their decision.

Inflation abroad remains low and many banks are maintaining expansionary stances while others are looking to tighten policy. In particular the diverging monetary policy between the Riksbank and the Fed has led to a USDSEK price break to a multi-year high not seen in 4 years. This break to 7.36 has the potential to carry to significantly higher levels. An equal wave relationship comes into play near 7.60. A meaningful break above 7.60 would then target 8.00 with even higher potential still towards 8.43.

EURSEK is moving higher as well. However, its increases are not as profound because the ECB is looking to expand their balance sheet. In essence, the monetary policy between the ECB and Riksbank are on similar paths with resistance looming just above current levels near 9.36. 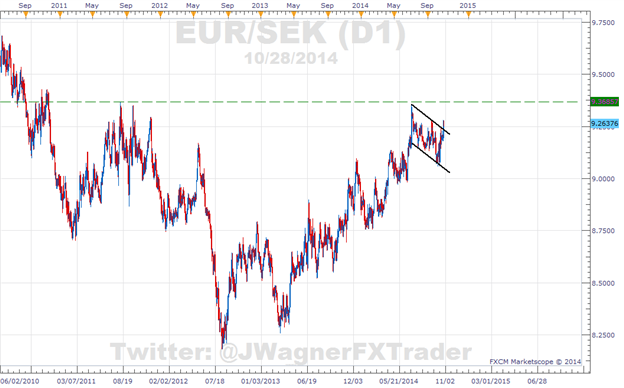