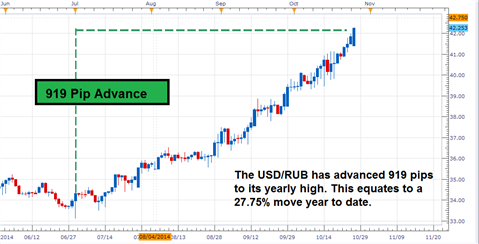 After holding rates steady at 8.0% in September, the Central Bank of Russia is expected to contemplate an additional rate increase at their Board of Directors Monetary Policy Meeting to be held on October 31st. Despite a brief reprise from S&P, concerns over reaching mid-term monetary policy goals remain vast given the rise in inflation and depreciating ruble.

A week after Moody’s downgraded Russia’s long-term credit, Standard and Poor’s maintained April’s downgraded rating of BBB- while retaining a negative outlook on debt. Accompanying their rate decision, S&P issued a warning to Russia—risks to future reductions remain strong. According to the financial service provider if inflation exceeds 10% or further sanctions weaken Russia’s net external position the rate will again come under review. While the MICEX reached a two week high Friday, mirroring the rate decision itself, the USD/RUB closed 393 pips higher reflecting the added caveat.

Bearing in mind S&P’s cautionary 10% and the current October inflation rate of 8.3%, remarks made by Deputy Governor Sergei Shvetsov during a conference in London are brought to the forefront, more relevant now than ever. Noting the banks unwillingness to continue aggressively using reserves to curb depreciation, the Governor concedes that the bank will seriously consider raising borrowing costs if inflation expectations continue along their current elevated path.

Despite the already implemented 250 bps cut this year the Ruble has lost nearly 28% of its value against the US dollar from the start of the year. It has also weakened against the banks dual currency basket, rising from 42.2685 at the last policy meeting on September 12th, to 47.0277 at present.