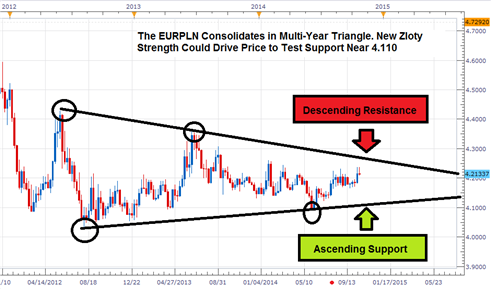 Today at the 4th edition of the international conference on the Future of the European Economy, NBP President Marek Belka hinted at an undervalued Zloty. His statement that “Poland has a fantastic, splendid economic location for doing business, low taxation and an undervalued zloty…” can be supported by statistics shared during the conferences introductory remarks, October’s monetary policy statement, and the first of two financial stability reports released.

When assessing the 25 year post communism transitional period, Poland has doubled their share in world exports while most western European countries shares are slipping. Furthermore, between 1991 and 2013 GDP per capita increased from 32 to 70% of the EU 28 average. Positive advancements have continued into 2014 as September figures show signs of recovery.

The minutes released following the October 8th 50 bps rate cut, highlight the silver-linings in an otherwise decelerating economy. Unemployment fell for a third time in September dropping to 11.5% while Core CPI increased 0.2 percentage points from August. Subsequently wages increased, escalating 3.5% in the first half of 2014 when compared to the previous year. A nod was also given to Poland’s GDP in the IMF’s World Economic Outlook which recently adjusted Poland’s growth forecast up to 3.2% in 2014 and 3.3% for 2015.

Accompanying these elements of robust economic activity is a sound financial stability report. The report shows no change or improvement in all 5 areas of assessment with one notable improvement in the area, ‘Outlook for Environment of Polish Economy’. Furthermore systematic risk to the financial system remains minimal as no major imbalances manifested that could negatively impact the systems functionality and liquidity structure.

Meanwhile the outlook in Europe is a bit bleaker with 25 European banks failing stress tests today as the ECB looks to prove its creditability. Combined with the mention of an undervalued currency, the Zloty has been able to trade as low as 4.20800 today after opening at 4.22710. The new Zloty strength could drive prices to test support as the EURPLN consolidates in a multi-year triangle.