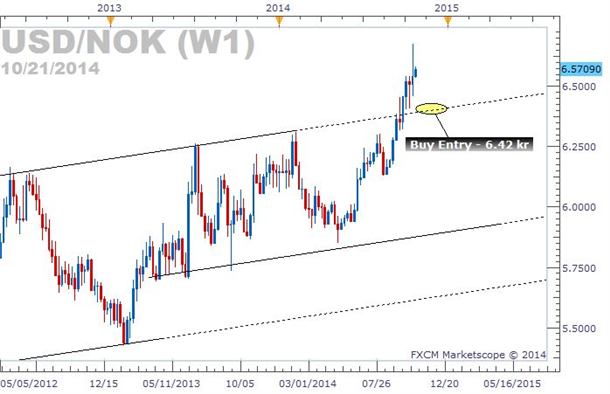 Ahead of retail sales and unemployment data, Norges Bank is scheduled to announce their key policy rate on Thursday, October 23rd. Hesitant to introduce new monetary policy amidst encompassing market turmoil the MPC is expected to retain the current deposit rate of 1.5%. When considering developments pertaining to the global and domestic economy, as well as commodity markets NGB will likely address the downside risks, but balance them out with positive advancements. Such a neutral stance may favor the krone which has closed above Scotiabank’s Q4 USDNOK (6.35) outlook since September 23rd.

Global growth among Norway’s trading partners paints a mixed picture. While growth is expected to decrease in Japan and remain flat in Sweden and the Euro Area, GDP is expected to increase in the UK and the US, which combined account for 30% of Norway’s export demand. Domestically, despite investment in the housing(-10%),petroleum (-8%), and corporate(-4%) sectors declining in volume in 2014, relative to 2010-2013 averages, the inflation and output gap approaching 2015 is expected to narrow with inflation surpassing the output gap. A lower output gap would indicate a more efficient economy; as actual output becomes greater than potential output, demand increases creating inflationary pressures. If this view persists, it may offer some forward looking relief given September’s 0.2% CPI decline.

As Western Europe’s largest oil exporter, Norway’s domestic economy is dependent on the petroleum sector to a certain degree. At present oil is trading nearly 12 dollars a barrel lower than on October 1st, corresponding to a decline in the government’s NOK denominated petroleum revenues. However, the degree of dependence has been mitigated by a built up Government Pension Fund which has allowed Norway thus far to offset non-oil budget deficits through the sale of foreign exchange. Given this debt structures inability to be maintained indefinitely, it comes as a reprieve that the short term imbalance in cash flows may reverse as oil futures have only fallen comparatively 7.64 a barrel.

Despite a relatively balanced mid-term Norwegian economic outlook, the current market weaknesses are prevailing in the FX market. In the past month the US Dollar has rallied against the Norwegian Krone, breaking above its bullish channel. This leaves us ultimately bullish USDNOK but only after a sell off towards 6.42 kr. In the event there is a pullback the previous resistance level could become support.