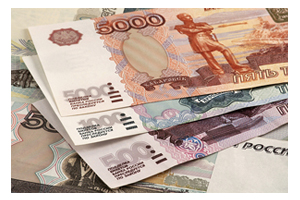 Wednesday the Bank of Russia again adjusted the operational band in which the Ruble is expected to trade against a 0.55USD/0.45EUR currency basket. The lower bound was set at 35.85 with an upper bound of 44.85, up from the October 7th lower and upper bounds of 35.65 and 44.65 This 20 kopeck change in the range signals the largest increase since the marked invasion of Crimea on the 28th of February in which the range increased by 35 kopecks. FX interventions are likely to continue forcing adjustments in the range as deteriorating internal and external conditions continue to pose a threat to the Russian economy and the Ruble’s value.

Under a managed float system the Bank of Russia often engages in FX volatility smoothing, in order to allow the economy to adjust to the fluxes in the Ruble’s exchange rate. Adjustments are made to keep the currency trading within a band spanning 9 rubles, revised up from 7 on August 18th, and occur automatically when a cumulative volume of $350 million in FX is purchased or sold.

To support their currency, between March and October, Russia depleted their international reserves by $40 billion with nearly a quarter of the reduction occurring between September and October. Even with the recent intervention, Russia still maintains one of the world’s largest foreign currency reserves with a balance standing at $454.7 billion. Thus it is likely that intervention to sustain the ruble will continue as weak domestic and international conditions continue to pose implications for the currency.

External shocks including sliding oil prices and imposed sanctions have reduced Russia’s volume of output and exports which have led to a meager OECD growth forecast of 0.5%. With a bleak economic outlook investors are expected to take a risk adverse stance and likely move capital estimated at $100 billion abroad. Additionally, limited borrowing opportunities have left banks struggling to pay US dollar denominated debts. With many of these deficiencies being structural in nature, monetary solutions remain limited.

One potential monetary solution involves the Central Bank raising interest rates for the 4th time this year in an effort to curtail the flight of current assets and attract new investment. A further increase in the benchmark rate could also help bring September’s 8.0% inflation back down in alignment with the 6.5% target. A second monetary tool, short term open market operations, could be used to relieve the banking sector via foreign exchange repurchase agreements. These agreements would provide banks with the necessary reserve balances to fulfill their debt obligations in exchange for collateral.

Until any decisions are made at the next monetary policy meeting on October 31st the USD/RUB looks to continue moving in the direction of the upper band closing last week at a new high of 40.085. 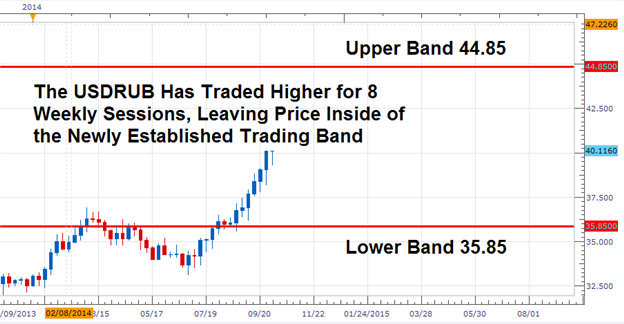