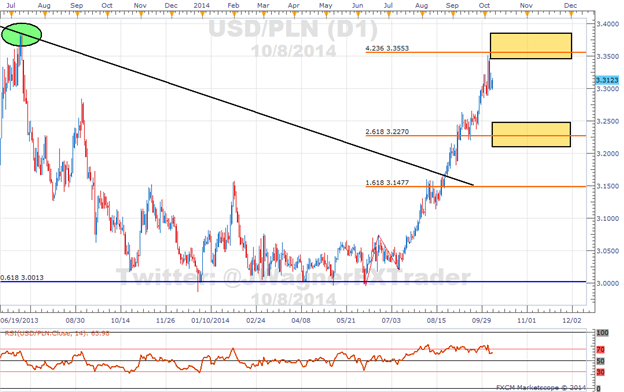 USD/PLN Finds Resistance as NBP Cuts Rates by 50 bps to 2.0%

Domestically, economic growth has weakened due in part to reduced advancements in industrial production, construction, and retail sales. As a result the International Monetary Fund expects inflation for the year to only be 0.115%. This came after August CPI figures declined for a second straight month (-0.3%) leading consumers to expect continued low inflation. Additionally, although unemployment has declined it still remains high (11.7%) restricting wage pressure.

Globally uneven development has led the IMF to revise global growth figures for their October World Economic Outlook Publication. Growth for 2014 and 2015 is now expected to be 3.3% and 3.8% respectively, down from 3.4% and 4.0%. While growth outlooks in the US and UK are positive, those in Central and Eastern Europe are moderate with countries posting limited or, in the case of Russia (0.2%), decelerating GDP growth. Furthermore low energy prices have contained global inflation and in Germany, Poland’s largest trading partner, factory orders declined by 5.7% in August, leaving it unlikely that the Euro Area’s largest economy will experience significant economic growth.

With firm downside risks abroad and slow recovery at home a 50 bps reduction was considered necessary by the NBP to bring inflation rates in line with the medium term target, 2.5%. Longer term, diverging monetary policy from the Fed and NBP will likely fuel more gains for the USD/PLN pair, which has currently found resistance at the wave relationship 3.35 cited last week.

As prices consolidate, look to 3.23 to offer support. Any surprises from the FOMC minutes the afternoon may affect this pair too.