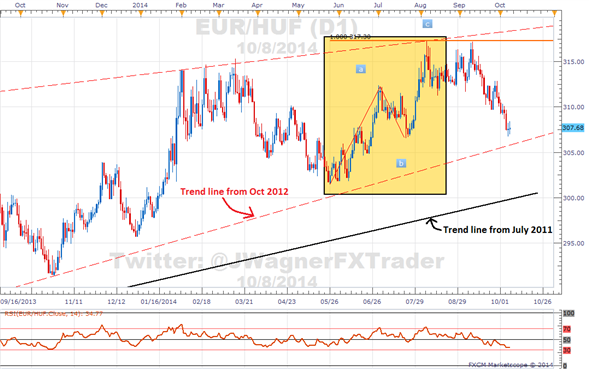 Minutes from the September 23 Monetary Council Meeting were released today, providing additional insight into the council’s decision to hold rates steady at 2.1%. Based on the assessment of current domestic factors, financial market variance, and international risks the Central Bank of Hungary maintains the stance that medium term target inflation can be achieved under the continuation of the current 2.1% interest rate.

Domestically, demand has recovered in line with the additional output produced and reduction in unemployment from 7.9 to 7.6 percent. Furthermore, the easing of credit restrictions combined with an increase in real income (resulting from low inflation) has also resulted in an increase in consumption. However, despite this gradual internal recovery, expected inflation is projected to remain around zero for the remainder of the year due to low energy prices and an awareness of persistently low inflation in external markets.

Growing geopolitical risks abroad have left investors uncertain and sentiment volatile. While long term yields have maintained quarter one levels, conflict in Eastern Europe, further European Central Bank rate cuts, and the likely but not definitive 2015 timing of U.S. Fed rate increase has left the MPC uncertain about the direction and magnitude of future investment.

Furthermore, global demand is slightly weaker due to sanctions in Eastern Europe and slow growth in the Eurozone. If sanctions and low inflation externally continue to inhibit trade and economic growth beyond the estimated -0.2%, MPC members acknowledge that under this variant scenario a loosening of monetary policy may be required.

Alternatively, if economic growth is more robust and inflation rises faster than estimated in the baseline scenario, the MPC acknowledges that a tighter monetary policy may be needed to keep inflation on the path to the medium term target. Sooner than expected rate increases, by advanced central banks may also require a tightening of monetary policy.

With the current disinflationary impact expected to deteriorate and symmetrical inflation risks, the USD/HUF continues to be stuck inside its 240-250 range, with little evidence suggesting a break anytime soon. However, the FOMC minutes later today could be a catalyst if there are any surprises.

From a technical perspective in the EUR/HUF, prices sold off to our initial target of 307 after the rate announcement. There is enough support through price action and wave relationships for a bounce to develop up towards 313.

However, the tan box is an equal wave pattern where the length of wave ‘c’ equals the length of wave ‘a’. When this pattern emerges, many times prices will fully retrace to the origination of the pattern. In this case, the beginning of the pattern is at 301.50. Trend line support (black line) is also near this same level. Therefore, on a successful break below 306, target 301.50.

It is difficult to say which scenario would play out in the short run. Longer term, the equal wave pattern suggests lower prices eventually.