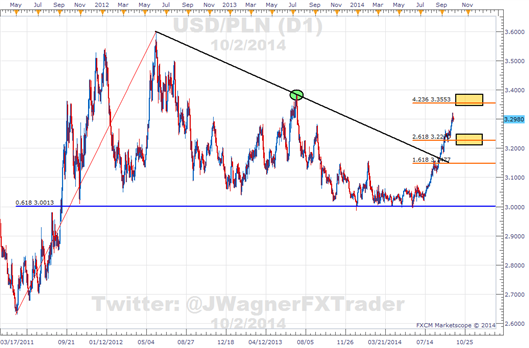 Focus at the upcoming MPC meeting (October7-8) for the National Bank of Poland, will be centered on adjusting monetary policy to counter the current economic slowdown and the future uncertainty surrounding Poland’s economy. Actions taken at last month’s meeting indicate that interest rates may be cut by 0.25-0.50%; both figures were proposed in September, but were not validated.

Uncertain internal and diverging external conditions indicate inflation may continue to persist below levels deemed reasonable by the NBP relative to their medium term target, 2.5%. Under this scenario the justification for lowering NBP rates was agreed upon by the majority of MPC members at last month’s meeting.

Domestically, a survey conducted in September by the Central Statistical Office revealed consumer inflation expectations for the ensuing 12 months to be low, at only 0.2%. This comes after negative inflation reports in July and August (-0.2,-0.3), a decline in production (-1.5 Index=100), and a drop in the GDP Growth Rate (-0.5%) over the same time period.

Internationally, monetary policy cycles among central banks have diverged. While the U.S. and U.K. are tightening policy the European Union engaged in further easing measures. Stagnation in the Euro Zone and conflict in Russia over Ukraine have depreciated these currencies, making Polish goods more expensive. As a result the Polish export sector has faced challenges as, 27.3% of their goods are destined for Germany and 12.2% for Russia.

In response to the preceding conditions the USD/PLN is 10% off of the 2014 lows. The two tan boxes on the chart identify some key levels to watch as we approach next week’s rate announcement. The upper box is near a wave relationship and 2013 high price of 3.35. Prices are likely to find a reaction lower near this level. If prices do sell off immediately, the lower tan box near 3.23 would be a level to watch.

Longer term, the trend is higher so we’ll see how the currency handles the rate announcement.