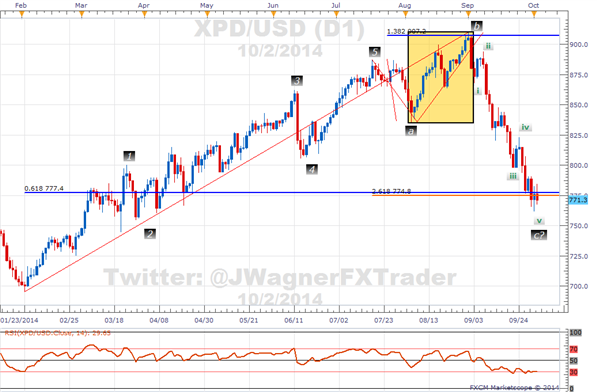 Palladium is one of the 6 platinum group metals and is both malleable and ductile. It can exist as a free metal or as an alloy in combination with other elements including gold and platinum. These adaptable characteristics make palladium a valuable metal in the manufacturing, electrical and chemical industries.

While used in electrical contacts and the polymerization of chemical compounds, the majority of palladium is used in the manufacturing of catalytic converters for automotive exhaust systems. Thus, the demand for cars influences the demand for, and price of palladium. Statistics from the International Organization of Motor Vehicle Manufacturers (OICA) indicate that vehicle production increased 3.6% in 2013 and can be expected to continue increasing in line with global population growth and rising demand in emerging markets.

While demand for products, comprised in part of palladium, is increasing rapidly the supply of palladium is not keeping pace; it’s been hindered by disruptions in Russia and South Africa, where 80% of the world’s palladium is mined. A five month strike at the world’s largest mine, the Bushveld Complex in South Africa, halted 20% of the world’s production at a loss of 2 billion dollars in revenue. Further indication of a shortage comes as a result of actions taken by Russia’s three sources of palladium – Norilsk Nickel, Gokhran, and The Russian Central Bank.

In a statement released to investors, Norilsk Nickel expressed their intent to purchase $2 billion worth of palladium from the Central Bank on the grounds that in 2014 consumption is expected to increase by 2% and the supply deficit is to double. Furthermore, Gokhran, Russia’s precious metals and gems repository will likely begin purchasing palladium from miners in 2015. While exact reserves are unknown, the intent to buy indicates that current reserves are low or exhausted. Given the capital intensive nature of mining platinum group metals, it is unlikely that substantial new players will enter the market in the near term. Therefore, the actions of entities in South Africa and Russia will continue to affect prices as they have in the past.

In the last 18 months Palladium retraced up 291.5 pips for an increase of 32%. Prices are expected to continue rising as technology advances, allowing palladium and platinum to become substitutes in production, draw prices closer to parity. Currently (as represented in the chart below) 2 different wave relationships appear near 777 in addition to the 61% retracement of the previous impulse.

The wave count below is the favored count and suggests eventual news highs above 910 while prices hold above 695. The tan box is our biggest clue as to why this is the favored count. The tan box appears to be a clear 3 wave move and it holds two internal wave ratios as well. Thus, the pattern has several ratios matching up suggesting the price action since July 2014 has been corrective and is likely to be fully retraced to the upside.

A move below 735 begins to weaken this outlook.