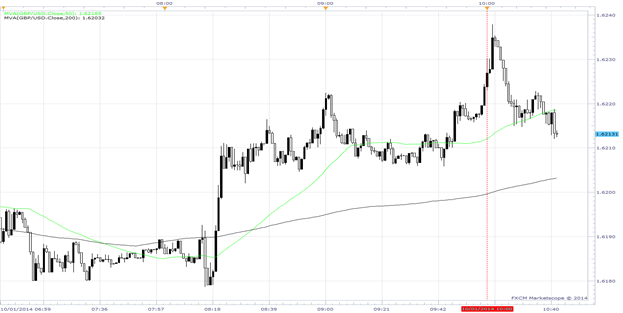 - US Construction Spending contracts to -0.8% m/m.

The headline September US ISM Manufacturing reading fell to 56.6 from a prior reading of 59.0 in August, for the first slip since the June 30 release. An economist with the Institute of Supply Management, the firm that released the report, referred to the changes in ISM numbers as geopolitical risk gaining a voice in the September manufacturing data. The ISM’s Holcomb also stated that a little cooling in production is not a concern.

The Prices Paid component of the report came in above expectations at 58.5 versus a 56.6 consensus estimate. An increase in business performance could also be attributed to geopolitical unrest and a slower pace of the current charge of the recovering economy.

US Construction Spending contracted to -0.8% versus +0.5% expected, on a monthly basis. According to data specifics provided at the release: August US private non-residential construction fell -1.4%, which could have been a large contributing factor to the overall disappointing headline reading.

Here’s a summary of the data this morning that’s stoked the US Dollar pullback:

GBPUSD charged to $1.6237 on the back of the weaker than expected manufacturing data out of the United States. The negative readings caused a falter in the bullish onslaught of the USD; however, much of the Sterling gains have been retaken by the dollar in the aftermath following the data release. GBPUSD was trading around $1.6213 at the time of this report.