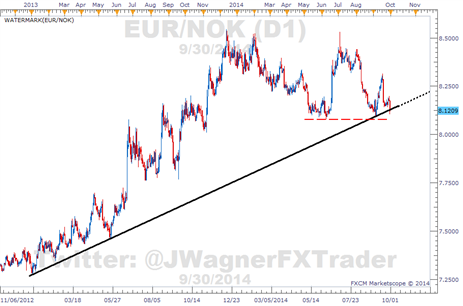 Commencing in October, Norges Bank will execute the sale of foreign exchange equivalent to 250M Krone daily from the State’s Direct Financial Interest on behalf of the government in conjunction with the Government Pension Fund Global. The acquired Krone will then be used to cover the government’s non-oil budget deficit in accordance with the petroleum fund mechanism.

According to the mechanism, when the non-oil budget deficit exceeds the government’s petroleum revenues in NOK, than the remaining deficit must be financed through the conversion of foreign exchange revenues from the SDFI into NOK. This reduces the amount of revenue that can then be transferred from the SDFI into the GPFG as savings.

Thus, in the long run it is the size of the non-oil budget deficit that will determine the value of the Krone, as it ultimately determines the amount of foreign exchange to be converted. As the existing oil and gas reserves continue to draw down in the Norwegian shelf, changes in the debt structure will increasingly influence the value of the Krone.

However, in the short term imbalances in the structure of net cash flows, resulting from fluxes in crude oil prices and USD values, do have the potential to impact the krone exchange rate. At present, the announcement by Norges Bank to sell foreign exchange, resulting from such an imbalance, has affected the EUR/NOK.

From a technical perspective, prices have been driven down to a support trend line that has supported prices for the past 2 years. This is just above a second horizontal shelf of support near 8.07 (red line). If the NOK continues to strengthen, it could push the pair down to 8.00 and possibly down to 7.80.