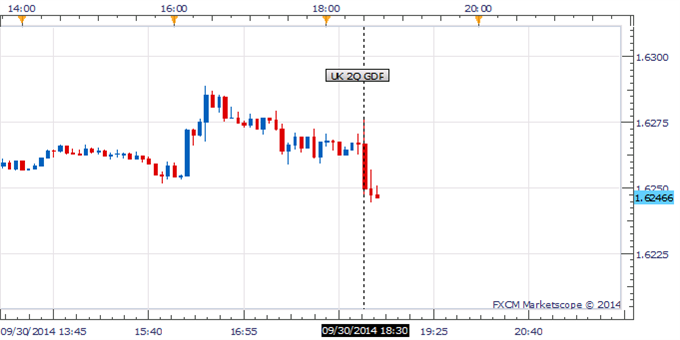 The UK Finalized Gross Domestic Product (GDP) for the second-quarter came in at 0.9 percent versus 0.8 percent expansion in the first-quarter. This slightly exceeded market expectations of 0.8 percent. Moreover, the year-on-year reading revealed 3.2 percent expansion in the UK economy, which met market’s forecast. Robust GDP figures suggest high levels of economic activity and expansion, which supports inflationary pressures. This may mean Bank of England will be more inclined to tighten their monetary policy by potentially increasing rates, which are generally bullish for the currency.

Ahead of the data, the British Pound traded higher against the US Dollar to hit a session high of 1.6289. Immediately after the release of the GDP figures, GBP/USD extended gains, however it was not enough to propel it higher as it soon lost steam.

Advancing ahead, September’s USD Consumer Confidence will take most of the attention at 14:00 GMT. A gauge used to assess consumer sentiment regarding employment, business conditions, and personal income is expected to show a print of 92.5 in September compared to 92.4 in August. A number equal to or higher would mean consumer confidence will be at the highest level since November 2007. This result will bode-well for the US Dollar as consumer spending is likely to be stronger in the horizon, which will translate into inflationary pressures.

From a technical angle, DailyFX Currency Strategist Ilya Spivak mentions near-term support to rest at 1.6088 (38.2 percent Fibonacci Expansion) and resistance at 1.6255 (23.6 percent Fibonacci Expansion). He is short the cable at 1.6233, initially targeting 1.6088. Meanwhile according to DailyFX Speculative Sentiment Index, the ratio of long to short positions in the GBP/USD stands at 1.10 as 52 percent of traders are long.