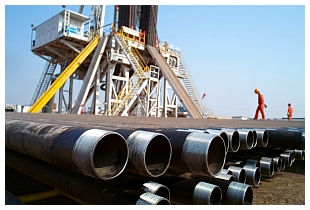 Elevated geographical and political conflict with Russia has yielded a high level of global risk aversion. As a result the country has experienced a reduction in trade flows and available lines of credit.

Comprehensive sanctions against individuals and businesses representing and operating inside the Russian Federation have posed challenges to the country’s economic development and monetary policy. Despite President Vladimir Putin’s lofty call for 6% growth the Organization for Economic Cooperation and Development (OECD) expects a figure of only 0.5% for the year. The lower number is a direct reflection of the reduced trade flows in and out of the country’s key energy and manufacturing sectors.

As a leader in crude oil and natural gas production, Russia is one of the largest exporters of energy. Directionally 80% of crude oil and 30% of natural gas production is transported to the European market. However, in recent months pricing and political disputes with Ukraine have resulted in sanctions against Russia, thereby slowing their rate of transport. Without sufficient domestic demand to pick up the slack, allied industries- construction, transport, manufacturing- will likely feel the impact as the energy sector accounts for much of their demand.

Specifically, within the manufacturing sector the automobile industry has recorded significant loses. With the Russian car market down 12% this year two major foreign auto makers have reduced production at their corresponding facilities in Russia. With sales to Russia down 8.5% through June, Volkswagen shut down production in early September for 10 days in an effort to reduce supply. General Motors followed suite announcing their intentions to limit output through a reduction in the number of shifts and labor force.

This uncertainty surrounding Russia’s economic outlook and heightened political tensions has induced capital flight, as net capital outflows in Q1 reached $146 billion—the highest since 2008. Consequently the Ruble has fallen 16% over the course of the year from 32.469 to 38.832 USD/RUB.

Prices have been respecting this price channel for the past 2 years.The recent move higher in September could be a short term blow off top as the new high is occurring on a diverging RSI oscillator.Anticipate a consolidation or possible dip over the coming days. 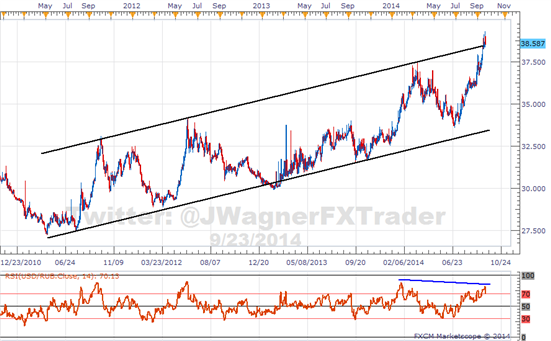