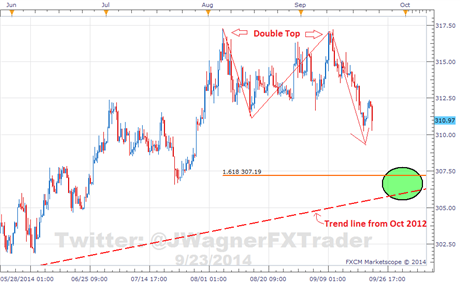 Following an inflation targeting policy, Hungary’s central bank kept their base interest rate at 2.1%. The decision, a reflection of the central bank’s commitment to maintain low rates until inflation (0.2%) moves closer to the targeted 3% and international debt exposure is further reduced.

While net foreign assets still remain negative, the net foreign debt of Hungary has generally declined in each quarter following Q2 2010. Hungary is also one of the few emerging countries showing a sizable current account surplus of €1,262 million, as the export sector has strengthened. The bank has also reported a GDP growth projection of 2.9%, an increase of 1.8% over last year.

Meanwhile continued monetary policy easing in the EU has made the Euro a less attractive investment and therefore put less pressure on the Forint.

From a technical perspective, the USD/HUF is going to trade in relation to the outlook on US interest rates, which will likely bring the pair back towards the former breakout zone and strong support of 238-240.

The EUR/HUF exchange rate ran into resistance at their 2011 highs (not shown) and formed a bearish double top pattern. Using a conservative target on the double top of 1.618 times the pattern height targets a drop into the 307 price zone. In the same price zone, we also find a support trend line connecting the lows since October 2012. Therefore, prices are likely to find support in the 306-307 area.