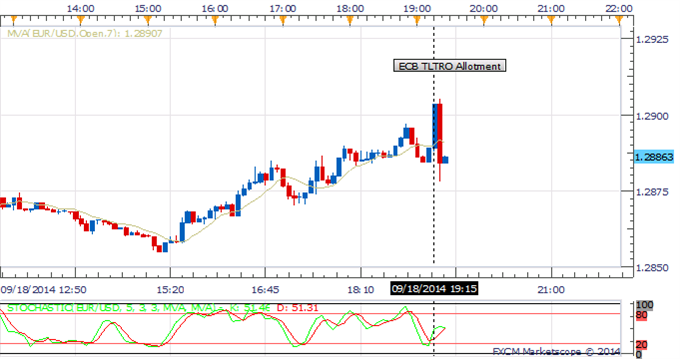 The deployment of the European Central Bank (ECB) Chief’s targeted lending program, often referred to as TLTRO, announced in June, showed a weak response as banks took €82.6 Billion in targeted long-term loans. A survey of economists polled by Bloomberg called for a median forecast of €150 billion. The trillion euro stimulus package introduced by Mario Draghi, a tool to boost credit for the real economy and keep the financial system flooded with liquidity, is expected to boost ECB’s balance sheet to approximately 3-trillion euros from 2-trillion euros. The size of ECB’s balance sheet is negatively correlated with the Euro.

Ahead of the results of the first TLTRO stimulus, the Euro grinded higher against the US Dollar, but traded just shy of 1.2900 level. Immediately after the release, EUR/USD plunged to trim its earlier losses as ECB targeted loans came in weaker-than-forecast, trading firmly below the psychologically important 1.2900 level. DailyFX Currency Strategist Ilya Spivak mentioned “a larger-than-expected capital allocation seems likely to offer support to the Euro.” However, the opposite has happened and it boded-ill for the currency pair.

Not too distant away, the market may possibly be free from the extensive risk built-up from the Scottish Independence Referendumas it draws to a close. The opinion polls ahead of the ballot points to a 50/50 chance of “Yes” or “No” outcome, which suggests volatility will remain alive for the session ahead in the forex market.

From a technical angle, DailyFX Currency Strategist Ilya Spivak mentions near-term support to rest at 1.2858 (marked by the September 9 low) and support-turned-resistance at 1.2994 (September 16 high). He remains short EUR/USD in line with the long-term fundamental outlook. Meanwhile according to DailyFX Speculative Sentiment Index, the ratio of long to short positions in EUR/USD stands at 1.15 as 53 percent of traders are long.