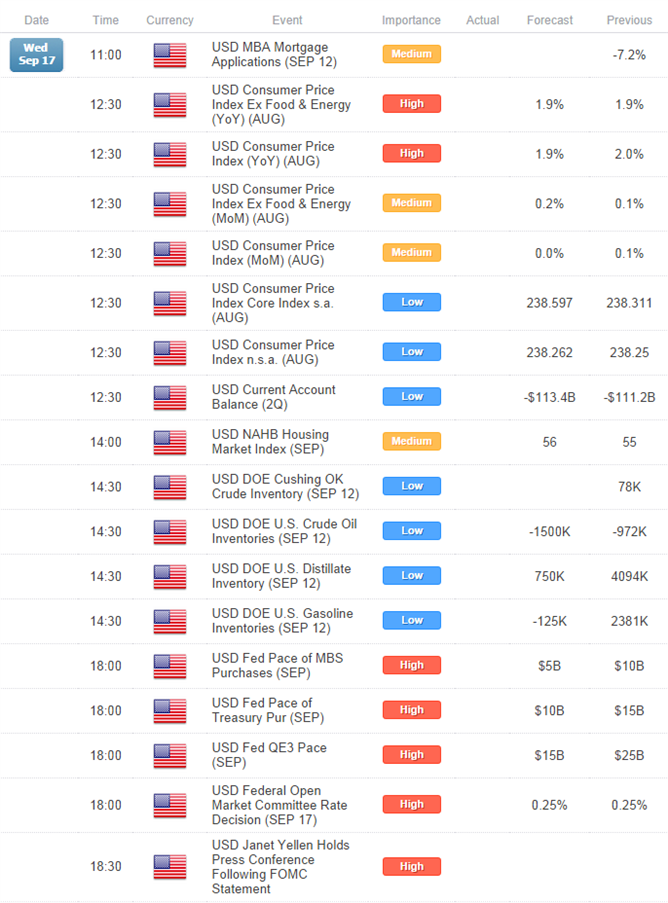 Crude oil is treading water near a two week high during the Asian session today. This follows a sharp rebound for the WTI and Brent benchmarks on Tuesday (+2.11 percent, +1.2 percent respectively). Reports that OPEC plans to reduce supply, alongside news of fresh stimulus from Chinese monetary policy authorities were cited as possible reasons behind the recovery.

The threshold for positive news flow to bolster crude oil has likely been lowered given the declines witnessed over recent months. Traders who have held short during the period may be easily prompted into taking profits on their positions. This may open the door to a bullish response to the upcoming DOE Petroleum Status Report, which is tipped to reveal a dip in total crude stocks for the fifth straight week.

Meanwhile, the precious metals are primed for a volatile session in light of the looming FOMC Meeting. The Fed’s accompanying statement, economic projections and press conference with Fed Chair Janet Yellen will provide the market with plenty of ammunition to help shape policy expectations.

Traders are mindful that the Fed is set to finish their enormous Quantitative Easing program next month and want firmer guidance on when rate rises may begin. There will be particular attention paid to whether the phrase ‘considerable time’ is dropped from the statement. If Yellen delivers a more explicit timeline or set of data dependent conditions for an eventual rate rise it would likely help bolster the greenback, which in turn would weigh on gold and silver.

Of course there is a risk the central bank will disappoint given August’s lackluster jobs report and Yellen’s persistent concerns about broader measures of labor market activity. If the Fed fails to deliver, the US Dollar could find itself lacking fuel to sustain its recent advance, and could fall victim to profit-taking. Under either scenario the stage is set for some significant swings for gold.

The tide may be turning for crude oil following a break above the commodity’s descending trendline and 20 SMA. The sharp rebound follows the emergence of a Hammer formation that offered a reversal signal near 91.20. Confirmation of the candlestick alongside a climb over the 23.6% Fib sets the scene for a run on the psychologically-significant 97.00 handle. Yet a clean ride higher may prove difficult given the broader bearish backdrop that has been in play for the past several months.

Gold has managed to regain its footing near the 1,222 mark yet remains confined within a broader downtrend on the daily. A Harami pattern has yielded a lackluster response thus far, suggesting a sustained recovery may prove difficult. A retest of the 1,241 barrier may see selling pressure renewed.

Gold: Recovery May Prove Difficult Against Backdrop of Broader Downtrend

Silver has managed to keep its head above the key 18.50 floor, which has yielded the appearance of a Hammer formation. However, the key reversal formation has failed to find decent follow-through. Against a broader bearish backdrop a recovery is likely to prove difficult. A climb over the 19.00 handle would be required to indicate a small base, whereas as daily close below 18.50 would open a knock on the 2013 low of 18.19.

Copper remains capped below its descending trendline on the daily despite a brief venture through the barrier in intraday trade. As a triangle formation takes shape the juice available to squeeze within the narrowing tip appears limited. This suggests an eventual breakout may be a more prudent approach to playing the base metal. A daily close below the nearby floor at 3.08 would open a run on the 3.01 mark.

Palladium’s recent rebound is seen as corrective at this stage. Broader bearish technical signals including the push beyond the ascending trend channel may limit the extent of the metal’s recovery. Selling pressure is likely to be renewed on a test of former support-turned-resistance at 866.

The appearance of a Dragonfly Doji near the 1,360 handle indicates indecision amongst traders. However, against the backdrop of a core downtrend on the daily, a consolidation rather than recovery remains a more likely path for platinum at this point. An eventual break of the nearby floor would cast the immediate risk lower for a run towards 1,314.