- US Dollar retraces after weaker data; just traded to highest levels of 2014 after ECB.

The August Nonfarm Payrolls report was much worse than market participants expected, yet the market isn’t treating the data as bad as it appears on the surface. The headline figure missed by some -88K at +142K overall, an affront to the >+200K ADP Employment report seen yesterday. Furthermore, the reading fell below the lowest estimate gathered by Bloomberg News, of +190K.

With the labor force participation rate decreasing by one-tenth to 62.8%, the Unemployment Rate was able to contract by one-tenth of a percent as well, to 6.1%, in line with expectations. Yet as the wage growth figures appeared stagnant with no indication that a wave of inflation is coming – thus necessitating an accelerated rate hike timeline from the Fed – there is very little to like about this jobs report overall.

After a strong run higher, the US Dollar is trading lower around the data and US yields have slipped. Here’s a look at the data:

See the US Dollar economic calendar for Friday, September 5, 2014.

The yield environment has been mixed for the US Dollar across the three timeframes we examine. Yields have dropped in the belly of the curve on the day after the payrolls miss; yet longer-duration instruments have seen their yields rise over the past week. At the moment, our attention is on the 10-year US Treasury Note yield, as it has traded to the tune of a +0.649 correlation with the Dollar Index (DXY) on a 20-day rolling basis. 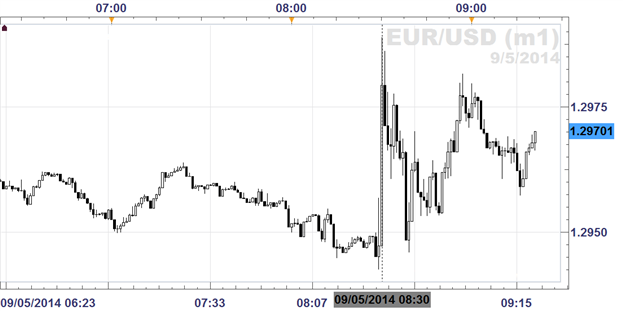 With US yields moving lower, the US Dollar has seen losses develop across the majors, in particular against the Euro and the Japanese Yen. The EURUSD traded in a 42-pip range around the announcement, trading between $1.2947 and $1.2989. At the time this report was written, EURUSD was seen at $1.2970. USDJPY was struggling as well, having traded off of its daily high of ¥105.71 to ¥104.93.