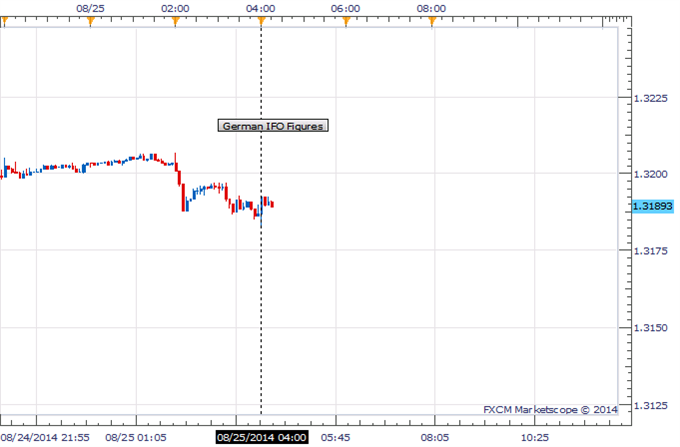 EUR/USD Below 1.3200 Amid German Business Climate At A 13-Months Low

The August German IFO Business Climate index crossed the wires at 106.3 compared to 108.0 in the previous month. It missed market expectations of 107.0, which is the lowest reading in 13-months. The August German IFO Current Assessment index came in at 111.1 versus 112.9 in July and missed estimates of 112.0. Moreover, German IFO Expectations dropped in weaker-than-forecast at 101.7. It seems the Euro-region’s powerhouse, responsible for approximately a quarter of the total Eurozone’s GDP, has deteriorated in last couple of months followed by the recent contraction for the 2Q. The country’s key business sentiment surveys use 100 as a centerline between positive and negative outlooks. The further north the value is from 100 the stronger the sentiment and vice versa.

Ahead of the data, EUR/USD continued to grind lower on the backdrop of broad US Dollar outperformance in response to supportive comments from Federal Chairwoman Janet Yellen at the Jackson Hole Economic Symposium last week. It traded firmly below the psychologically significant 1.3200 level. Immediately after the release of the figures, the Euro remained relatively muted against the US Dollar to remain firmly below the critical 1.3200 level. This worst-than-expected prints from Germany seems to add to the speculation about an expansion of ECB stimulus efforts, after dovish comments from the Chief Mario Draghi, says DailyFX Currency Strategist Ilya Spivak.

Looking ahead, the focus will turn to the US Dollar as July’s New Homes Sales figures are due at 14:00 GMT, later today. US economic news-flow has improved since early April and DailyFX Currency Strategist Ilya Spivak says there are rooms for an upside surprise from USD as analysts are underestimating the strength of the US economy.

Taking technical analysis into consideration, Ilya Spivak mentions near-term support at 1.3248 (50% Fib Exp.) and resistance at 1.3190-204 (61.8% Fib Exp.). He is short EUR/USD at 1.3644 in line with his long-term fundamental outlook. Meanwhile according to DailyFX Speculative Sentiment Index, the ratio of long to short positions in the EUR/USD stands at 2.05 as 67 percent of traders are long.