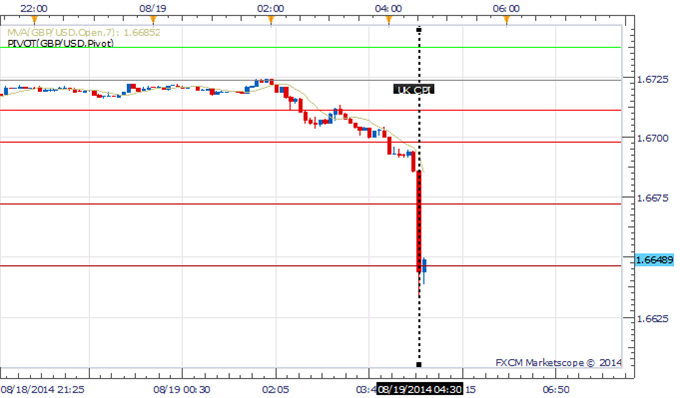 UK Consumer Price Index (CPI) for the month of July fell to 0.3 percent month-on-month compared to 0.2 percent increase in June. This missed market expectations that called for a print of -0.2 percent. Moreover, the year-on-year CPI reading slowed to 1.6 percent in July from 1.9 percent in June. It also fell short of market forecast of 1.8 percent. This underperformance relative to analyst’s expectations are consistent since the beginning of this year. These figures are essential to forex traders as CPI is the key measure of inflation for the UK and is used by the Bank of England (BoE) in making interest rate decisions.

Ahead of the data, the British Pound lost ground against the US Dollar to trade at a session low of 1.6687. Immediately after the release, GBP/USD plunged over 50 pips to trade as low as 1.6633. This sort of reaction is fuelled by traders reducing their bets on the BoE’s scope to normalize monetary policy sooner rather than later, hammering the British Pound south says DailyFX Currency Strategist Ilya Spivak. Furthermore, such outcome was reflected on the UK 10-year Gilt yield as it fell 2 basis-points lower after the CPI announcement, which suggests, again, that traders are cutting their bets on a rate hike speculation. This is on the backdrop of BoE Governor Mark Carney revealing over the weekend, his willingness to normalize monetary policy despite weaker-than-expected UK wage growth.

Glancing ahead, GBP/USD may face price action from July’s US Consumer Price Index figures, which takes center stage at 12:30 GMT, later today. Aforementioned economic data release is critical as it’s expected to have a direct impact in reshaping Federal Reserve rate expectations says DailyFX Chief Currency Strategist John Kicklighter. The US Treasury yields have fallen below 2.4 percent and implied yield forecasts derived from Fed Funds futures are trading at heavy discounts relative to FOMC’s own projections. This positions the US Dollar for a greater upside, if the CPI figures beats market expectations (headline forecast is 2.0 percent, core is 1.9 percent), compared to a ‘weak’ inflation number which may bode-ill for the dollar say John Kicklighter.

From a technical standpoint, Ilya Spivak mentions near-term support to rest at 1.6676 (38.2% Fibonacci Expansion) and near-term resistance is at 1.6739 (23.6% Fibonacci Expansion). He remains on the sidelines as he stands opportunistic to enter short at a more attractive level of entry. Meanwhile according to DailyFX Speculative Sentiment Index, the ratio of long to short positions in the GBP/USD stands at 1.76 as 64 percent of traders are long.