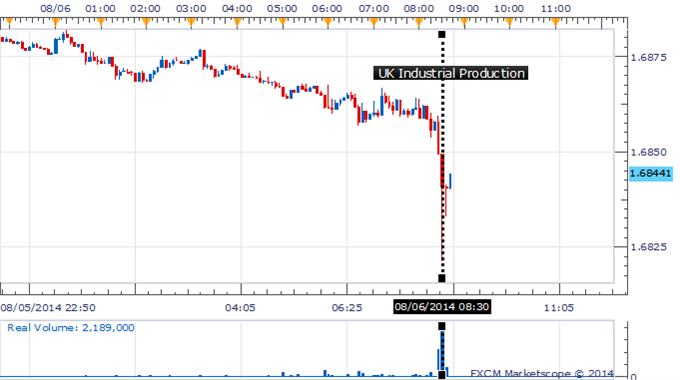 GBP/USD Plunges After UK Industrial Production And Before BoE Meeting

UK Industrial Production year-on-year, which measures the manufacturing output of the energy sector, factories, and mines, decelerated to 1.2 percent in June from 2.3 percent in May. This short-term indicator for the strength of UK industrial activity missed market expectations of 1.5 percent. Moreover, the month-on-month print registered at 0.3 percent in June, which was an acceleration compared to the prior month reading of -0.6 percent. However, it fell short of market’s forecast of 0.6 percent. This data can be important as uncontrolled levels of production and consumption can spark inflation, which eventually leads to monetary tightening.

Before the data release, the British Pound grinded lower against the US Dollar as it traded firmly above the psychologically significant 1.6800 level. Immediately after the data release, GBP/USD plunged to hit a fresh day low of 1.6821. This worst-than-expected industrial production figures adds to an increased deterioration relative to expectations in the UK data flow since late February. This may suggest that analysts have over-estimated the health of the UK economy and opened doors for a downward surprise for the British Pound says DailyFX Currency Strategist Ilya Spivak.

Glancingahead, the focus for the British Pound will turn to the high-profile Bank of England Rate (BoE) Decision, which is due on Thursday 11:00 GMT (Aug 7th). The general consensus is for the BoE to leave their interest rate on hold at 0.50 percent, a rate cut from 1 percent since February 2009. The BoE is also expected to report its mammoth £375 billion of asset purchases for the month of August.

For traders that respects technical analysis, Ilya Spivak mentions near-term support to rest at 1.6818-22 (38.2% Fib Ret.) and support-turned-resistance at 1.6935. He remains opportunistic to get short at a more attractive entry level rather than a trade-able rally. Meanwhile according to DailyFX Speculative Sentiment Index, the ratio of long to short positions in the GBP/USD stands at 1.27 as 56 percent of FXCM Retail Forex traders are long the cable.