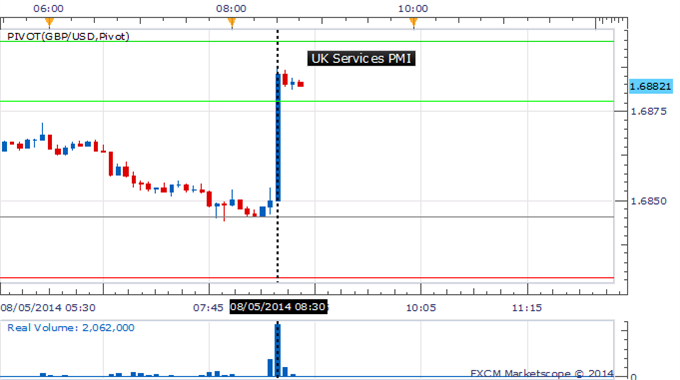 UK Services PMI accelerated to 59.1 for the month of July from the prior month reading of 57.7, according to Markit. The print outpaced market expectations of 58.0 and the British services industry grew at its highest level since November 2013. Moreover, UK Composite PMI rose to 58.8 in July from 58.0 in June. This reading was also above consensus which pointed to a print of 58.0. Readings above 50 indicate an expansion in services activity, and a number below 50 marks a contraction.

However, there has been an increased deterioration relative to expectations in the UK data flow since late February. This outcome has been impounded on GBP/USD, causing it to slump to a potential eight-week low. This may suggest that analysts are over-estimated the health of the economy and opening the door for a downside surprise and weigh on British Pound says DailyFX Currency Strategist Ilya Spivak.

Ahead of the data, the British Pound lost ground against the US Dollar to trade as low as 1.6845. Straight after the data release, GBP/USD catapulted to hit a session high of 1.6882. Furthermore, UK 10-Year Gilt added 3 basis-points to yield 2.56 percent after the data as better-than-expected services data may have caused traders to increase bets for a rate-hike.

Looking ahead, the focus transitions to ISM Manufacturing Composite gauge from the US, which is due at 14:00 GMT, later today. The expectation is for a print to drop in at 56.5 in July compared to 56.0 in June to show US service-sector growth accelerated to the fastest pace in 11-months. An upbeat reading may push the US Dollar higher as it will encourage speculation that the US economy may be sufficiently strong for the Federal Reserve to raise interest rates sooner-than-later says Ilya Spivak.

For many that regards technical analysis, Ilya Spivak mentions near-term support to rest at 1.6818-22 (38.2% Fib Ret.) and support-turned-resistance at 1.6929. He remains opportunistic to get short at a more attractive level rather than a trade-able rally. Meanwhile according to DailyFX Speculative Sentiment Index, 56 percent of retail Forex traders are long the GBP/USD.