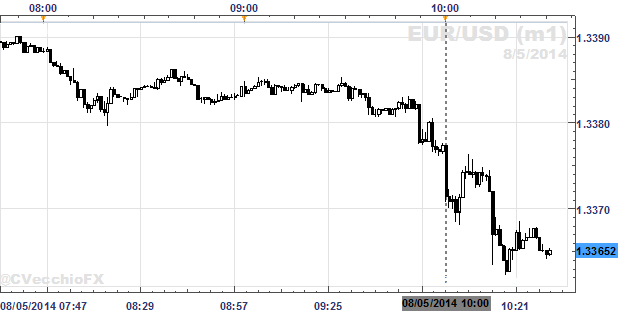 - July ISM Non-Manufacturing/Services at 58.7, the highest level since December 2005.

- ISM says “gains coming from almost every [US] industry.”

US economic data has been improving steadily over the last several weeks, aiding the US Dollar’s recent rebound. Although the greenback sold off modestly after the July US Nonfarm Payrolls report, it’s evident by the strength of hiring (>+200K in six consecutive months) that the US economy is hitting somewhat of a more consistent stride. Data released today fits in with this narrative.

Read more: EUR/USD, USD/CHF Flag Before Next Move - GBP/CAD Up Next

Two reports out this morning are helping the US Dollar continue along its recent bull run. Here’s the data lifting the buck:

These data are notable as they both have achieved new relative highs. For the July ISM Services report, the headline reading at 58.7 is the highest such level since December 2005. Considering that nearly four out of five jobs in the United States are in service industries, the strong rates of gain in the index point to sustained economic momentum through midyear.

Similarly, the June Factory Orders report showed the fastest rate of expansion since March, and the gains represented the biggest ‘beat’ (actual minus expectation) in nine months.

See the US Dollar economic calendar for Tuesday, August 5, 2014.

Around the announcement, EURUSD moved to fresh yearly lows at $1.3363, eclipsing the prior yearly low set last week at $1.3366. The US Dollar was moving up broadly across the board after the announcement, with USDCAD, USDCHF, and USDJPY all trading to/near their respective daily highs.

Read more: EUR/USD, USD/CHF Flag Before Next Move - GBP/CAD Up Next