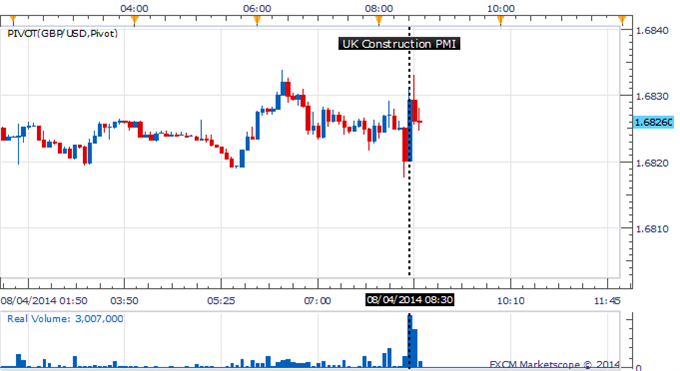 According to Markit Economics business survey, UK Construction PMI rose to 62.4 in July year-on-year from 62.6 in June. Although the data revealed that the British construction activity has slowed compared to the previous month, it exceeded market expectations of 62.0. Markit, the data provider, has announced that UK homebuilding rose to the highest level since November 2003. Readings above 50 represent expansion in Construction activity, and a number below 50 marks a contraction.

However, there has been an increased deterioration relative to expectations in the UK data flow since late February. This outcome has been impounded on GBP/USD, causing it to slump to a seven-week low. This may suggest that analysts are over-estimated the health of the economy and opening the door for a downside surprise and weigh on British Pound says DailyFX Currency Strategist Ilya Spivak.

Before the data, GBP/USD remained quiet to trade at 1.6820. Soon after the data release the British Pound jolted up to trade as high as 1.6825. This reaction is considered to be relatively muted.

For many that regards technical analysis, Ilya Spivak mentions near-tern support to rest at 1.6822-1.6721 (38.2% Fib Ret.) and support-turned-resistance at 1.6924. He remains on the sidelines as entering short with prices trading in close proximity to support level is not enticing from a risk/reward perspective. Also, the absence of a defined bullish reversal signal argues against going long. Meanwhile according to DailyFX Speculative Sentiment Index, 56 percent of retail Forex traders are long the GBP/USD.