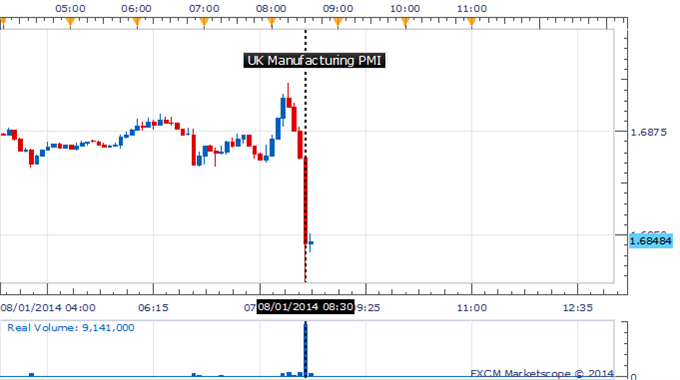 The UK Manufacturing PMI for the month of July came in at 55.4 versus the prior month reading of 57.2, which was revised lower from 57.5. The print, by a significant margin, missed market expectations of 57.2 and dived to the lowest level in a year. Although a reading above 50 signals expansion, the British manufacturing activity seems to have decelerated. This adds to the deterioration relative to consensus forecasts since late February, suggesting investors are over-estimating the resilience of the UK economy says DailyFX Currency Strategist Ilya Spivak.

Following the release of the manufacturing data, GBP/USD lost ground as it plunged more than 25 pips to trade at a session low of 1.6840. The British Pound is set to decline for fourth consecutive day.

Looking ahead, the spotlight is on the July’s US Employment Figures, which are due out at 12:30 GMT, today. The market is expecting a print of 230,000 increase in Non-farm Payrolls and the Unemployment Rate to register at 6.1 percent. Any upside surprise in the job figures could generate further gains for the greenback says DailyFX Currency Analyst David De Ferranti. This may be due to a stronger reading pointing towards a sooner-than-later first Federal Reserve interest rate hike.

For those Forex Traders considering technical analysis, Ilya Spivak mentions near-term support to rest at 1.6832 (38.2% Fib Ret.) and resistance at 1.6919 (23.6% Fib Ret.). He remains on the sidelines for now but claims entering a short position here is tempting. Meanwhile, accordingto DailyFX Speculative Sentiment Index, 56 percent of retail Forex traders are long the GBP/USD.